Often known as ‘generation rent’, the percentage of millennials who actually own a permanent house in the UK is dwindling. It is reported that millennials now spend, on average, one-quarter of their entire salary on housing – three times more than the generation of Baby Boomers!

But with the introduction of 95% mortgages and schemes like the government’s help to buy initiative, the dream of becoming a homeowner is becoming a reality for millennials around the country.

With this in mind, we created our very own index to discover the best (and worst) cities for millennial homeowners based on the following criteria:

Each category awarded points between 0 and 100 based on their performance. In short, the higher the score, the better.

The best cities to become a millennial homeowner 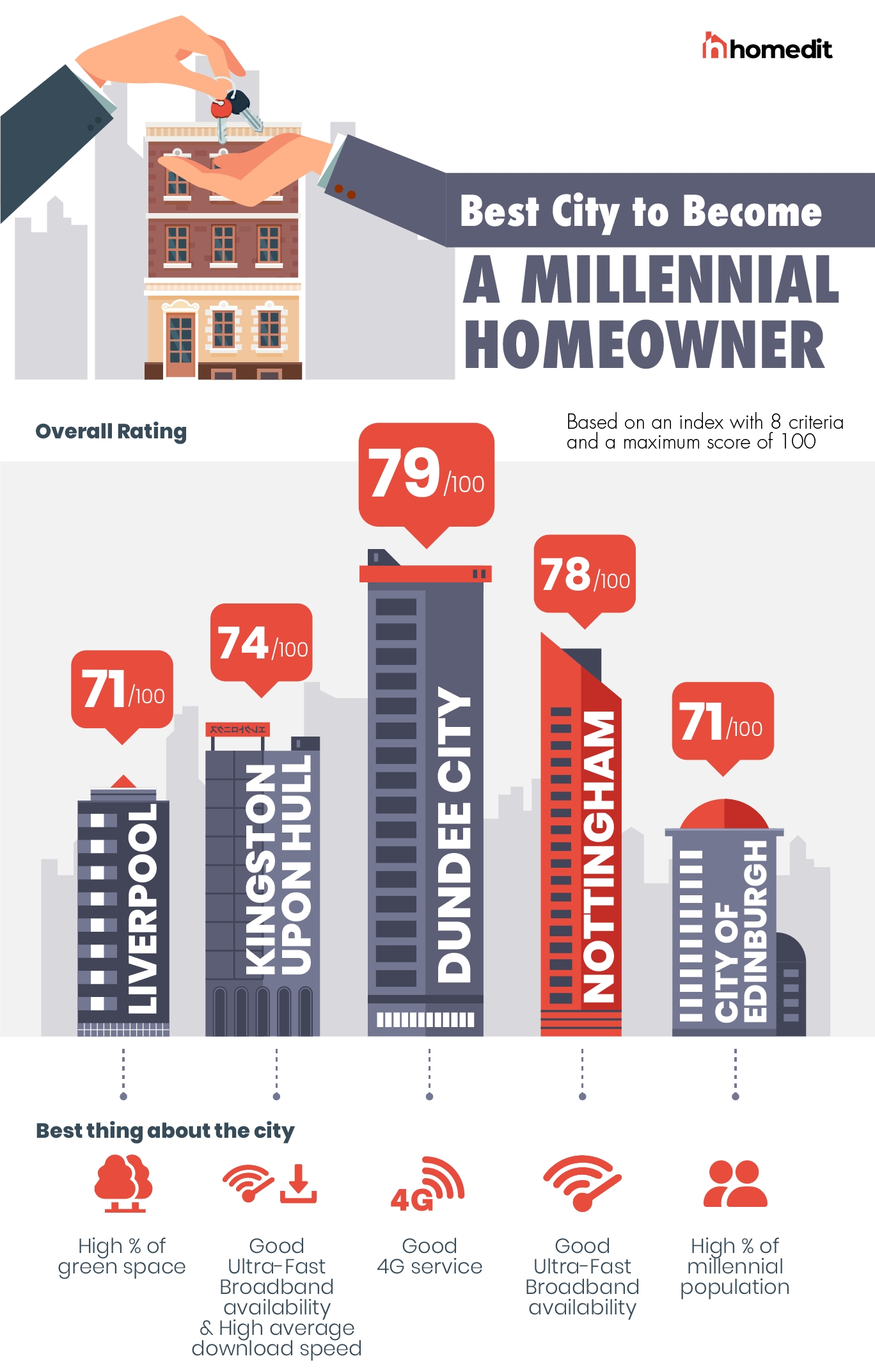 According to our study, the best city to become a millennial homeowner is Dundee City, finishing with a ranking of 79 points out of a possible 100 overall in our Millennial Index.

Dundee City scores highly for their 4G services, resulting in the city being awarded an impressive score of 93 out of 100. The city also has low average house prices and plenty of green space to enjoy, which means Dundee City was awarded 91 and 88 points respectively.

On the other hand, the city doesn’t score highly when it comes to average OFSTED rating for nurseries and primary schools in the area, resulting in Dundee City being scored just 57 points for this factor.

The second best city to become a millennial homeowner is Nottingham, following just one point behind Dundee City with a score of 78 out of 100.

However, Nottingham’s fares poorly when it comes to the number of pubs and bars per person in the area, scoring just 46 out of 100.

Coming third is Kingston upon Hull with 74 total points out of 100 in our Millennial Index. In our study, Hull scored full marks for their average download speed and ultra-fast broadband availability. The city also scored highly for having low average house prices and impressive 4G services, resulting in a score of 99 points out of 100 each.

However, our study found the city has below average OFSTED ratings for nurseries and primary schools in the area, resulting in a score of just 30 out of 100.

Liverpool comes in fourth with a final score of 71 out of a possible 100 points in our index. According to our research, Liverpool has ample green space, and gains 90 points out of 100. The city also has a large millennial population and low average house prices, resulting in a score of 81 points each.

But millennials who work from home may be put off by the city’s shortcomings on ultra-fast broadband availability, as the city scores just 60 out of 100 in this category.

Edinburgh ranks joint fourth with Liverpool, with 71 points out of a possible 100. Our research found that the city is home to a large number of millennials, resulting in an impressive score of 96 out of 100. Edinburgh also scored highly for 4G signal and average download speed, scoring 90 points and 79 points respectively.

However, millennials looking to buy a house in Edinburgh will be less than impressed by the city’s high average house prices, resulting in the city being awarded low score of 22 in this category.

The worst cities for millennials to live 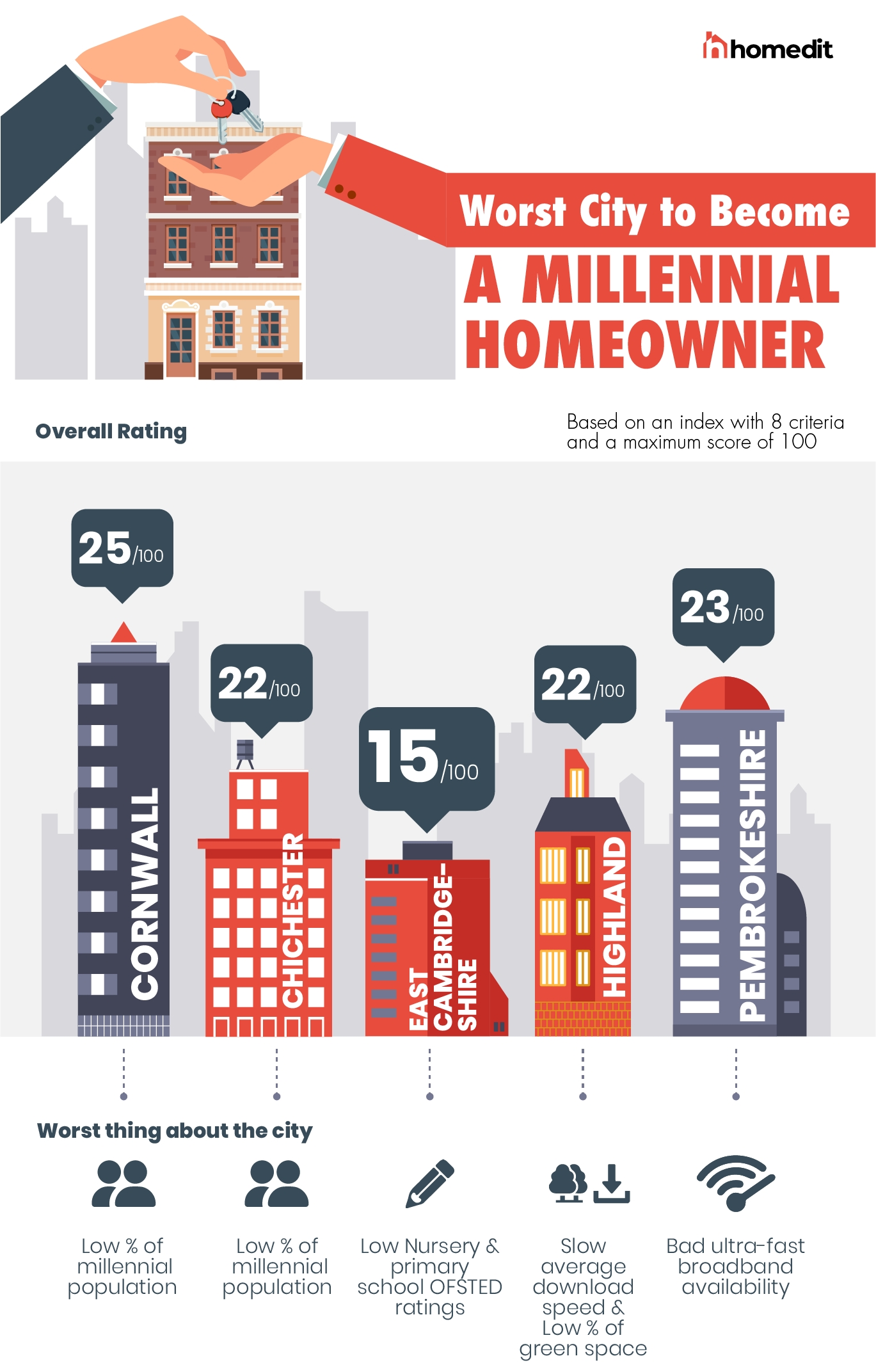 The worst city for millennial homeowners in the UK is East Cambridgeshire, gaining just 15 points out of a possible 100. The city scored zero points for their average OFSTED ratings of nurseries and primary schools in the area – the lowest rating of all cities analysed. The city also scored low for the 4G signal (six points) and the lack of green space available (seven points).

However, East Cambridgeshire makes up for this in the number of pubs and bars per person, gaining a reasonable 34 points in this category.

In second place is Chichester, with a final rating of 22 points out of 100 in our Millennial Index. Chichester scored zero points for the city’s millennial population – the lowest rating of all cities analyzed – and also scored poorly for ultra-fast broadband availability and high average house prices, resulting in a score of seven and eight out of 100, respectively.

Comparatively, Chichester’s best feature for millennials is the number of pubs and bars per head, gaining an impressive 94 points out of 100.

In joint second place with Chichester is Highland, in Scotland, with 22 points out of 100. Highland gained zero points for having a small amount of green space or slow average download speed. It also scored poorly for ultra-fast broadband availability (4 points) and 4G signal (9 points).

The city’s best factor is its average house price, coming in with lower prices than average and bagging a score of 64 out of 100.

The fourth worst city for millennials to settle in is the Welsh city of Pembrokeshire, finishing with 23 points out of 100. Pembrokeshire fails to rack up points for ultra-fast broadband availability and OFSTED ratings, scoring one point and three points respectively. They was closely followed by the amount of green space and download speeds being below average, resulting in just six points each.

Despite this, Pembrokeshire is the best city analysed for number of bars and pubs per head, gaining full marks for this factor.

Cornwall is the fifth worst city for millennials, scoring 25 points out of 100 in our study. According to our research, Cornwall doesn’t have a high millennial population, resulting in a score of just four points in our Millennial Index. The city also fares poorly for their average download speeds and green space, scoring nine and 13 points respectively.

Cornwall’s best factor, however, is their number of pubs and bars per head, scoring an impressive 93 points out of 100. 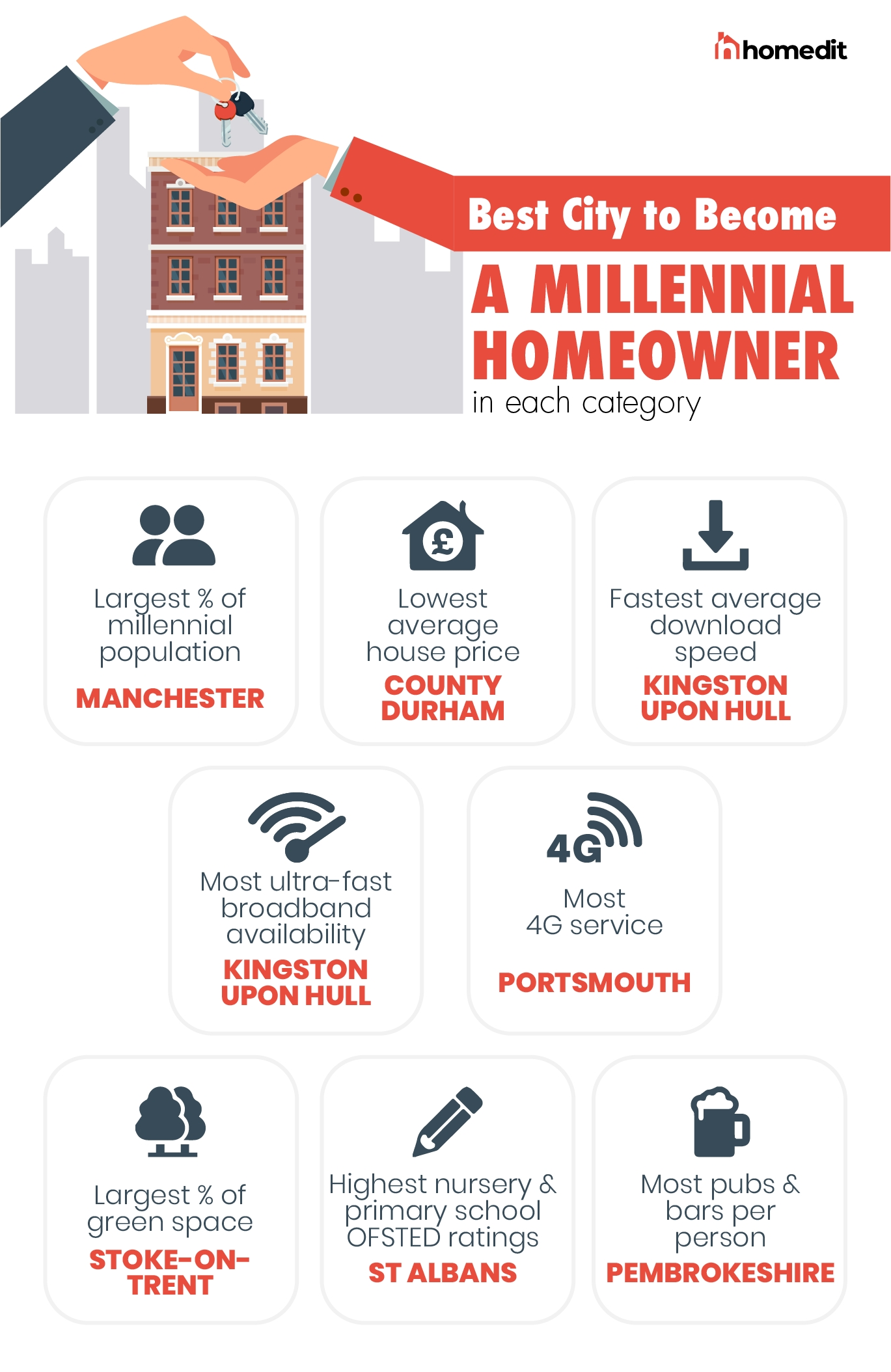 Millennials looking for cities to fit their specific wants need look no further as we can reveal the winning (and losing!) cities in each category.

The city with the highest percentage of millennials is Manchester. There are approximately 170,017 millennials living in Manchester, out of a total population of 552,858 in the city.

On the other hand, the city with the lowest percentage of millennials is Chichester. With a total population of 121,129 people, Chichester is home to around 16,603 millennials.

The city with the least affordable average house prices is, unsurprisingly, Greater London, where a house will set you back over £550,000, on average – £440,000 less than County Durham!

However, the city with the slowest average download speed is the Scottish city of Highland, which averages speeds of just 37 Mbits/s.

On the other hand, the city with the least availability of ultra-fast broadband is Canterbury, only available to around 3% of premises in the area!

The city with the best 4G coverage is seaside city of Portsmouth, with an indoor signal availability of 99% indoors from all service providers.

However, the city with the worst 4G coverage is Lichfield, with an indoor signal availability of around 51% indoors.

The city with the largest percentage of green space in relation to the whole city is Stoke-on-Trent, compared to the Highland which has the smallest percentage.

St Albans has the highest nursery and primary school ratings in the UK according to our ratings, compared to East Cambridgeshire who has some of the lowest ratings.

The city with the highest ratio of pubs and bars per person is the Welsh city of Pembrokeshire, which boasts 165 different bars and pubs throughout the city.

However, the city with the lowest ratio of pubs and bars per person is the Northern Irish city of Lisburn and Castlereagh, with just 30 pubs and bars throughout the city.