Exposed ceiling beams are an interesting architectural feature and have the ability to make a space feel utterly unique. Sometimes, though, you might wonder if your individual design style fits into a space with ceiling beams. 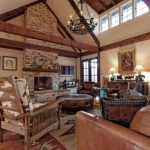 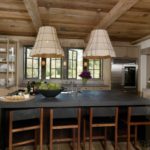 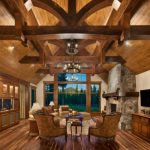 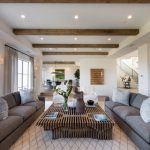 Say you’re on the hunt for a great apartment and you’ve found a perfect candidate…but you’re not sure if the ceiling beams will throw off your whole décor vibe. Ever been there? Or maybe you’re looking to design and build your own home but aren’t quite sure which direction to take with the great room’s ceilings. 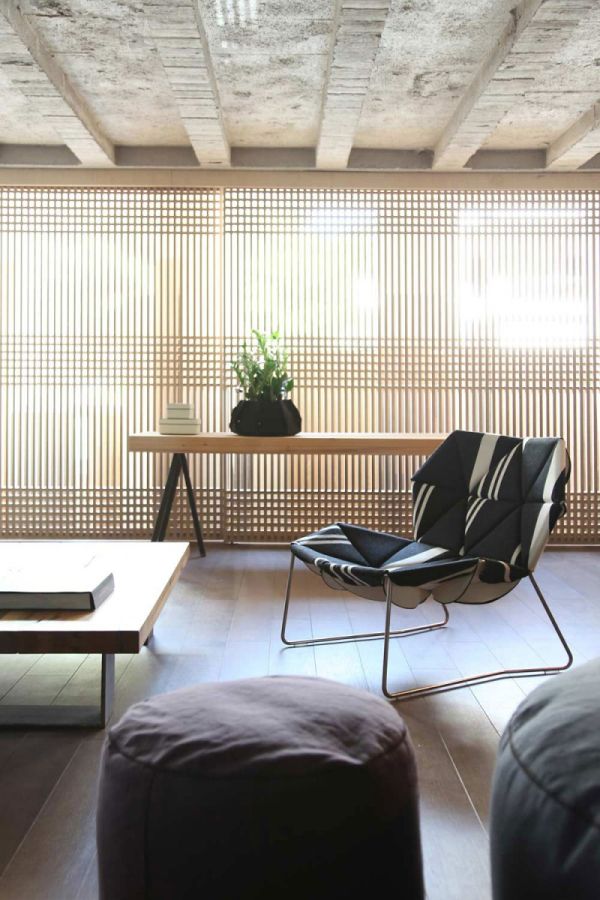 Fortunately, there’s a huge variety of the style and type of ceiling beams, and if you like the look, you’ll certainly be able to find the right match for you. Here are some ideas for different types of ceiling beams and the styles that they’ve been matched with.

The common types of ceiling beams

These are short beams typically made out of solid wood. They’re attached to the walls with brackets and they’re designed to support the weight of the roof. These beams can be positioned either horizontally or vertically.

You can easily recognize boxed beams by the pattern which they form once installed. They’re reminiscent of coffered ceilings and they form a waffle-like pattern with either square or rectangular sections that look like boxes. They’re quite eye-catching.

Not all types of beams have the role of supporting the roof. Some are designed to be decorative. As such, they don’t really need to be very solid and sturdy, they just need to look like they are. Faux wooden beams are only three-sided and hollow on the inside. They look like regular beams when seen from below but they’re not as heavy and they don’t perform the same role.

If you’re not a big fan of solid wood beams, there’s alternatives that you can try. Polyurethane beams are a particularly interesting option because they’re lightweight which is a big advantage in a lot of cases, making the whole installation process a lot easier. They’re also better for structures that are located in areas with a high probability of earthquakes. They can still be painted or stained just like regular wood beams. 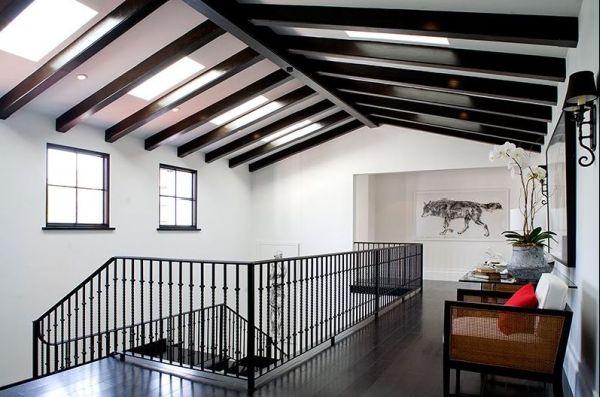 A high contrast between the exposed ceiling beams (high-gloss, black) and the ceiling itself (matte, white) provides immediate and bold visual style that continues throughout the classically black-and-white space. High contrasts in design will always be eye-catching, and ceiling beams might be just the perfect medium for such contrast. 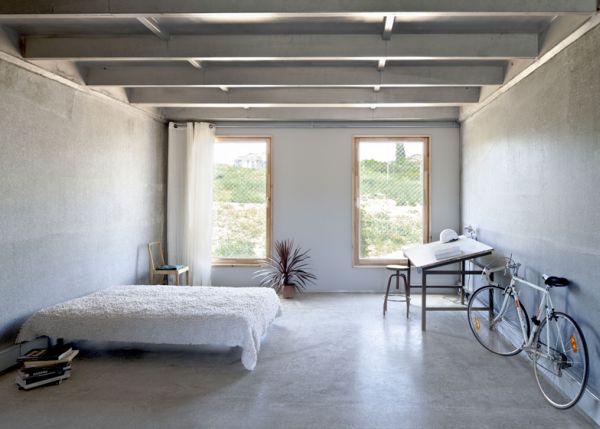 Perfect for those who gravitate toward a modern, minimalist style. Clean lines, sparse urban chic. 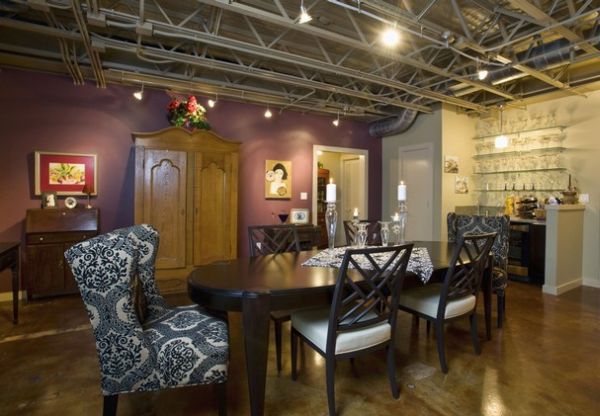 When your style welcomes industrial details, you can get away with a ceiling with steel beams and exposed electrical and ductwork. Juxtaposes interestingly here with more formal-toned furniture. 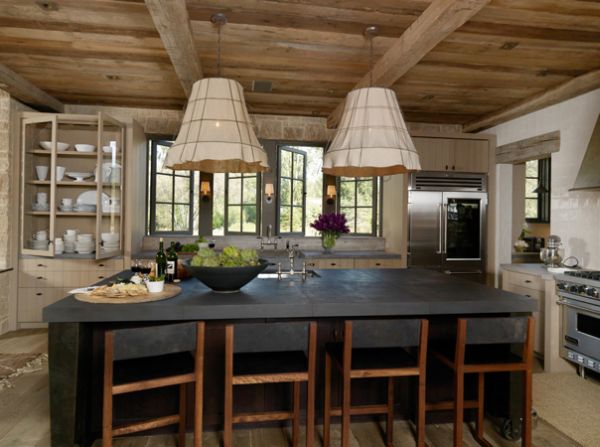 Rough-finished wood ceiling planks with a raw feel and chunky crossbeams provide warmth and texture to a kitchen. Lots of neutral colors, varied textiles and surfaces, and a punch of black keep the space feeling more like a contemporary cottage than a log cabin. 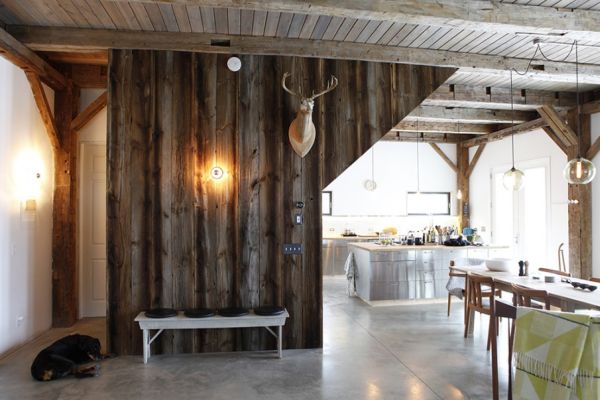 In this space, the architectural forteis exposed wood beams (ceilings, walls, corners), making the inherent style of the entire home an ode to the Natural. This design style is enhanced by earthy and nature-inspired décor elements, such as the deer head and wooden dining chairs. 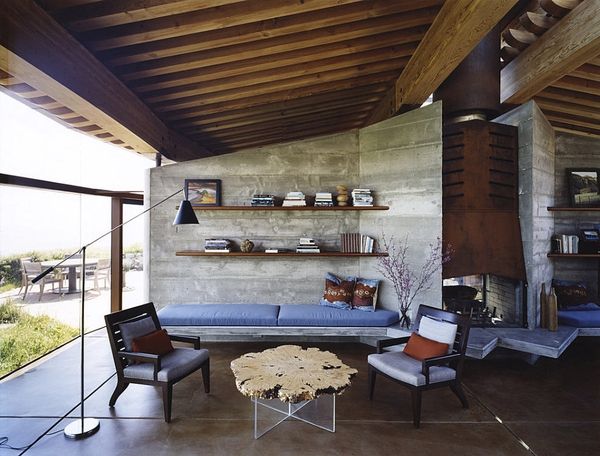 A heavily beamed wood ceiling, paired with raw concrete walls, a stained concrete floor, and loads of natural light, is an ideal way to embrace the natural element of simple – yet chic – style. There is a beautifully understated sense of balance and peace amidst these straight architectural lines. 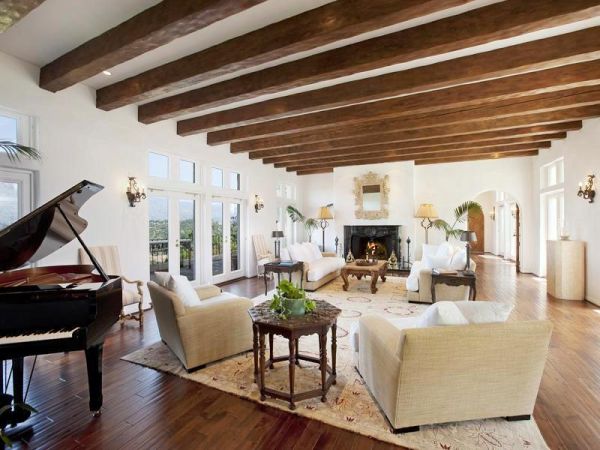 Homey Elegance: A light and bright room bedecked with a sophisticated collection of warm and welcoming pieces is emphasized with a heavily beamed ceiling (with dark, chunky wood beams that mirror the floor’s stain) and wooden floors. Painting the ceiling white while leaving the wood beams natural complements the entire room’s overall design scheme. 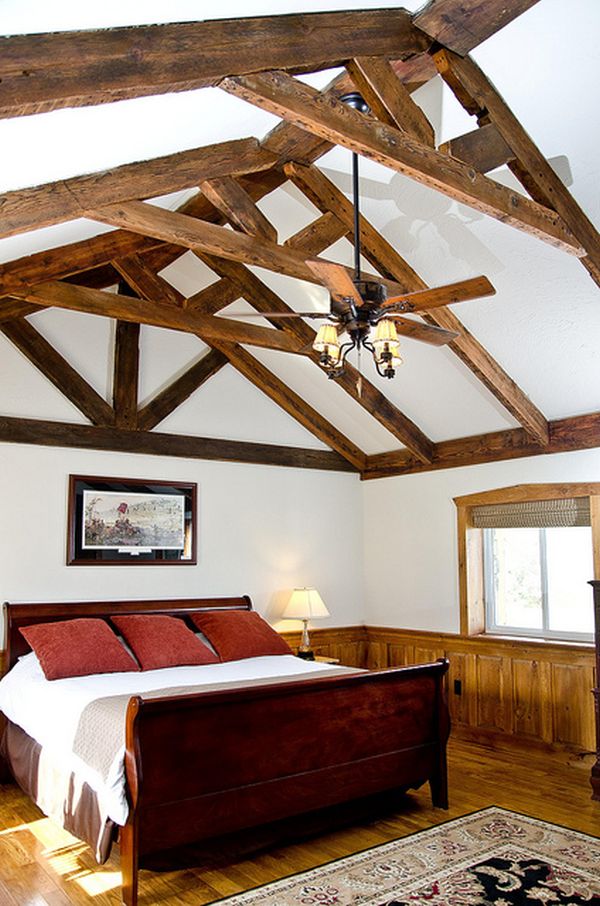 In a space where the ceilings are vaulted, dropping and exposing some ceiling beams will actually enhance the feeling of warmth and coziness in the space without sacrificing the architectural beauty and spaciousness of the high ceiling. This is a great design for those with a warm and welcoming cottage style in their home. 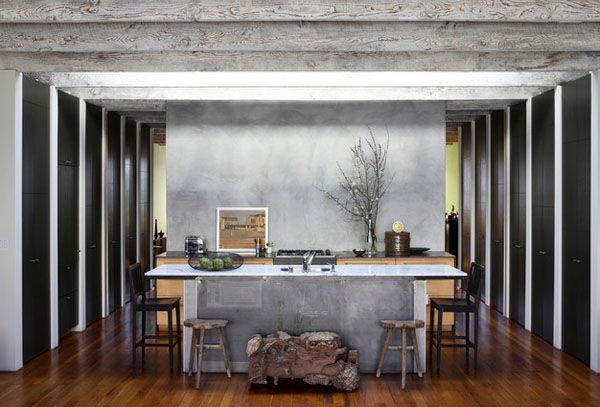 No matter what your style, ceiling beams done the right way can certainly enhance the look and feel of your space. What do you think? Do you have exposed ceiling beams in your space? Do you like them?

You might be tempted to decorate your ceiling with beams but before you do that you should consider the implications of such a fact. Decorative beams offer both pros and cons so it’s important to take all the elements into consideration in order to make an informed decision.

Decorative beams can add interest to a particularly high ceiling. This is a nice way of making a very high room feel more intimate and inviting as opposed to looking intimidating. This applies not just to residential spaces but also to all other types of structures.

You can also use decorative beams to highlight a certain architectural style. For example, if you’re going to a farmhouse-style design a few ceiling beams can definitely help you achieve the desired look. Be sure to decorate the beams in a way that suits the style.

Ceiling beams can also enhance a home and add resale value to it. Even if they’re only decorative they still add a lot to a space. Also, ceiling beams always have a big visual impact on a space regardless of how tall the ceiling is or what style it’s decorated in.

While decorative beams can help a large or very tall room appear more inviting and intimate, they’re not a great fit for small rooms. They can often overpower small spaces and they can sometimes add unnecessary visual interest to the ceiling.

There’s also of course an obvious disadvantage that you should also consider: the cost. Installing ceiling beams is costly both because of the materials involved and because of the actual installation cost. Keep in mind that not all beamed ceilings look great so you need to make a rather big investment if you want great results.

You should also take into consideration the cost of heating and cooling a room with a beamed ceiling. Such spaces tend to have less insulation which can raise these costs so be prepared for that if you want to add decorative beams to a space. 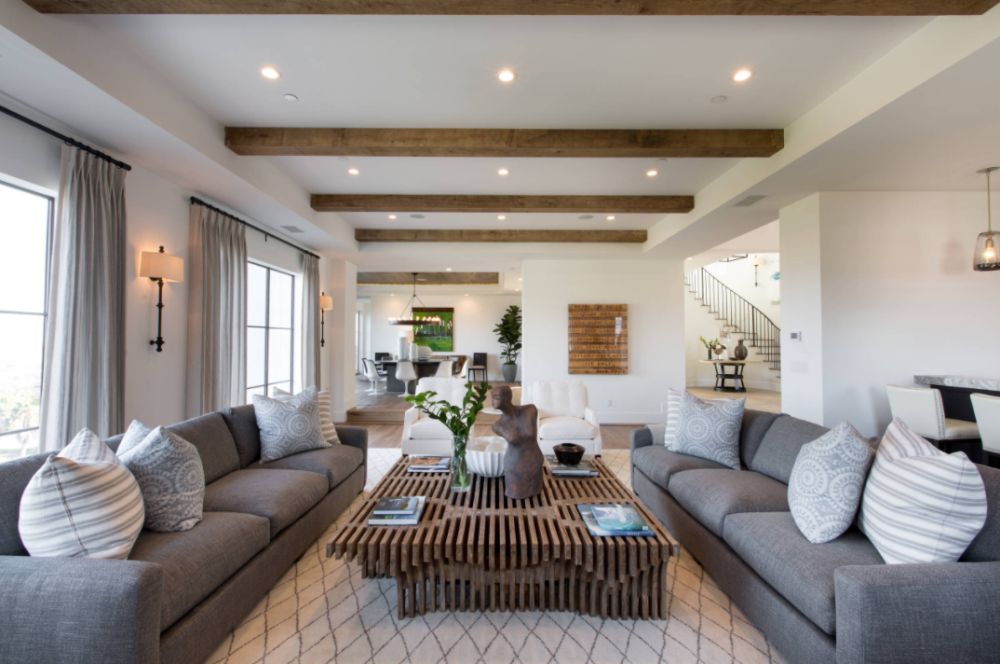 This is a lovely use of decorative wood beams to add a warm and inviting feel to this open concept living area. The ceiling is also kept very simple without any hanging light fixtures which puts even more emphasis on the beams. This is a space designed by studio Denise Morrison Interiors. 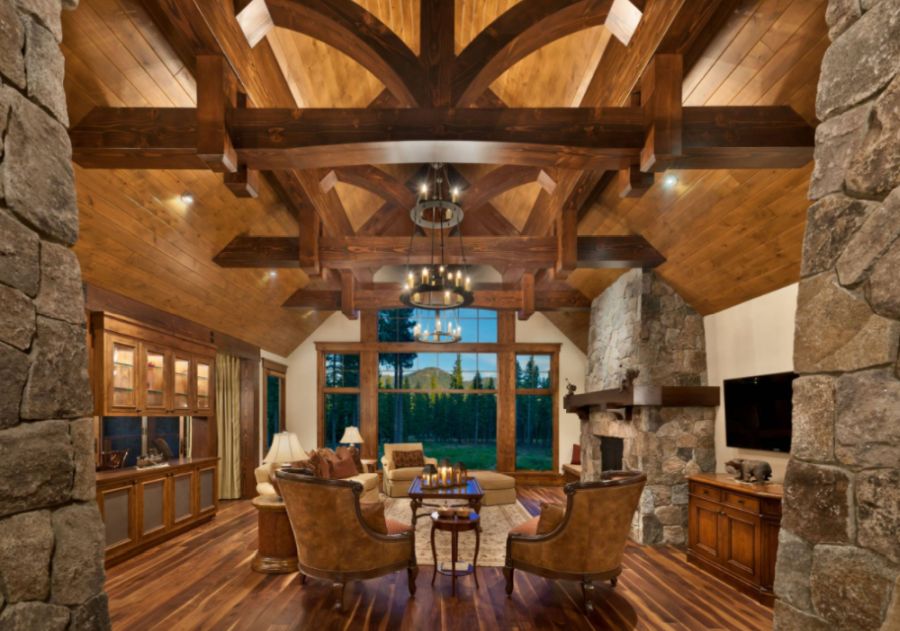 Mountain cabins and beamed ceilings are a perfect match to the point where it’s unusual to see a mountain retreat that doesn’t feature beams. With that in mind, there’s lots of beautiful opportunities here for turning the ceiling into a focal point. Check out this gorgeous design by studio NSM Construction if you want some pointers. 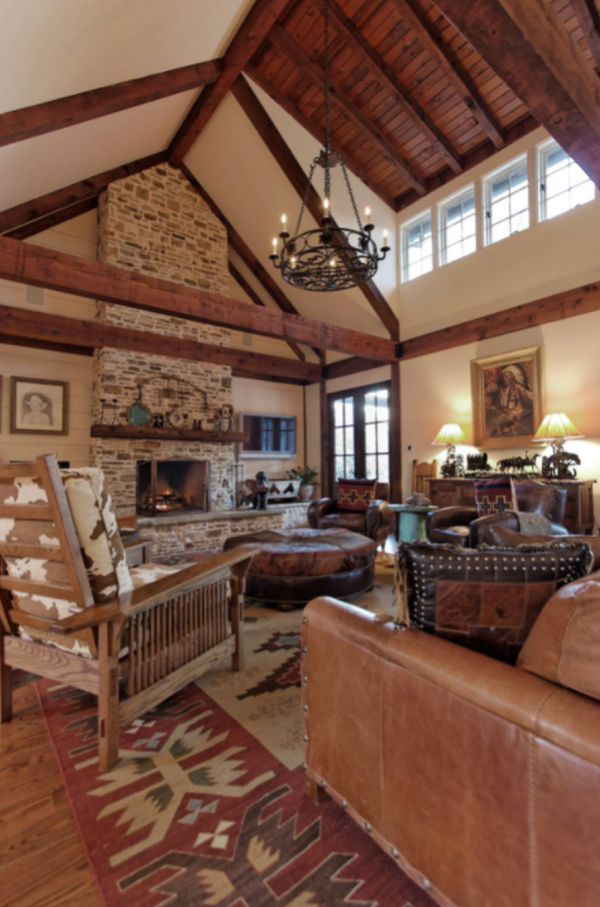 Of course, ceiling beams can also add warmth to a room. They can also be used to visually delineate a large and open area into distinct sections or to add more visual interest to a particular part of the room. This traditional family room designed by Dresser Homes can give you an idea of how such a strategy can work. 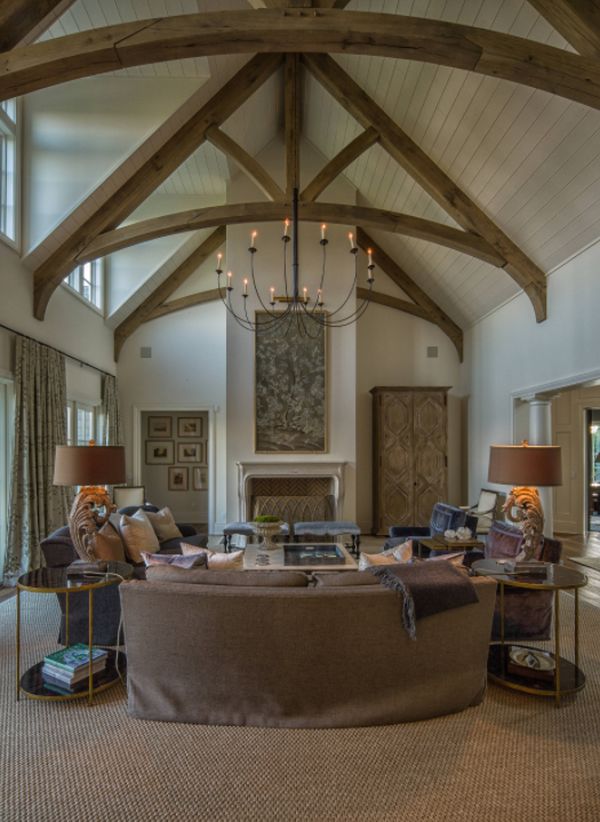 Ceiling beams are not always straight. If we’re talking about decorative beams, there’s plenty of opportunities to get creative with their designs, shapes and patterns. We really love the curved lines of this beautiful ceiling designed by studio Carolina Timberworks. The arched design gives this space a very grand and dramatic aesthetic. 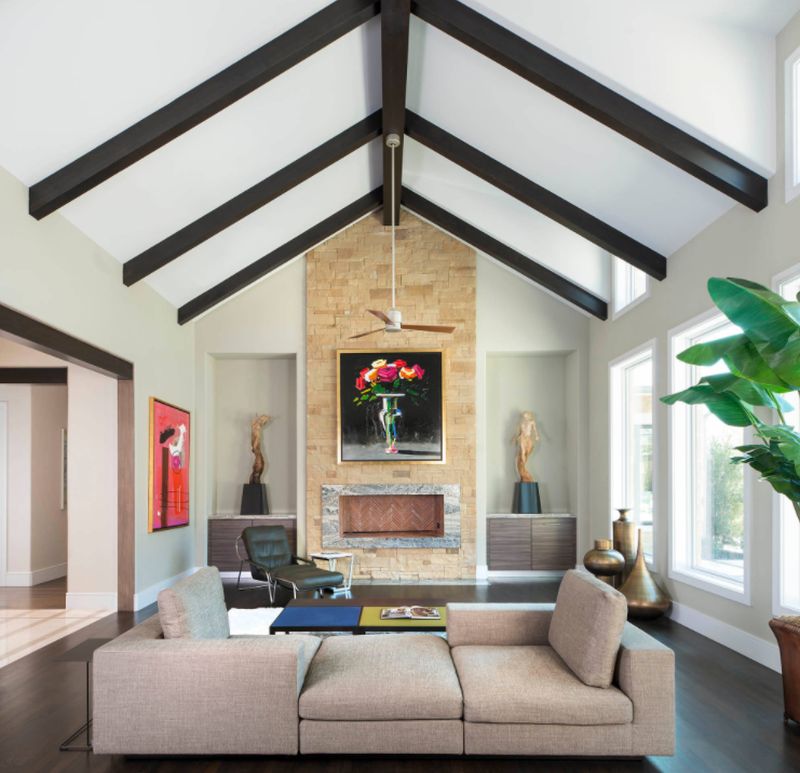 If you really want the ceiling beams to stand out, consider a high-contrast design. This open concept living room designed by Sharif & Munir Custom Homes has pastel-colored walls and a white ceiling with black beams that become the first thing anyone noticed upon entering this area. The beams also match the dark floor for consistency. 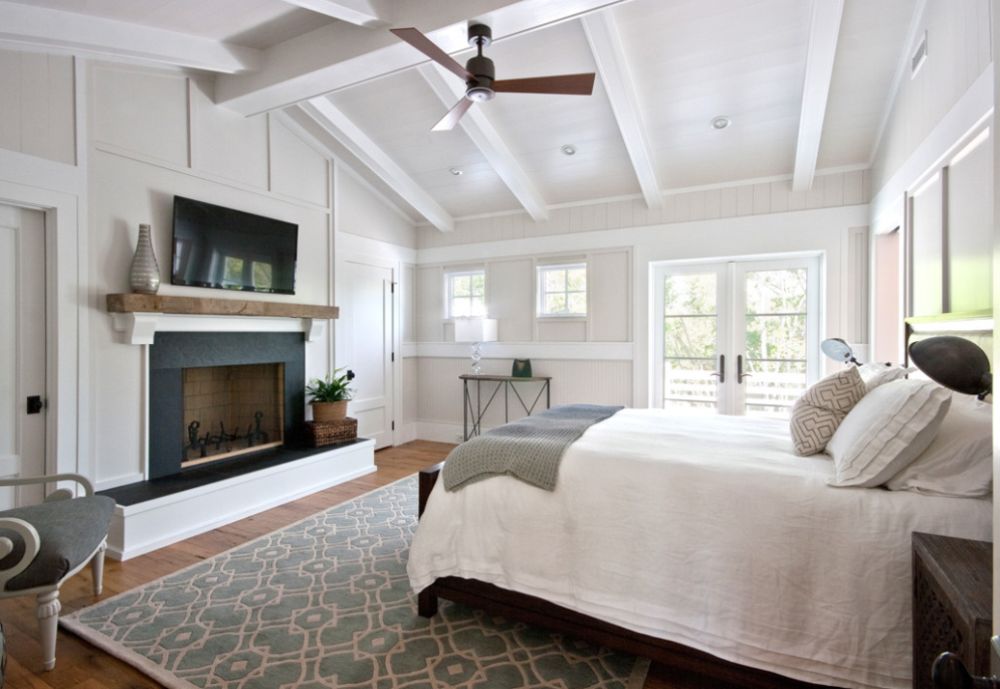 On the other hand, sometimes it’s better to have the ceiling beams blend in rather than stand out. These ones were painted white to match the ceiling and the walls of this cozy-looking bedroom. It’s a lovely look for a beach house. The beams give it a warm and cozy feel while the light color palette creates a breezy and airy ambiance. This is a design created by studio Ink Architecture + Interiors. 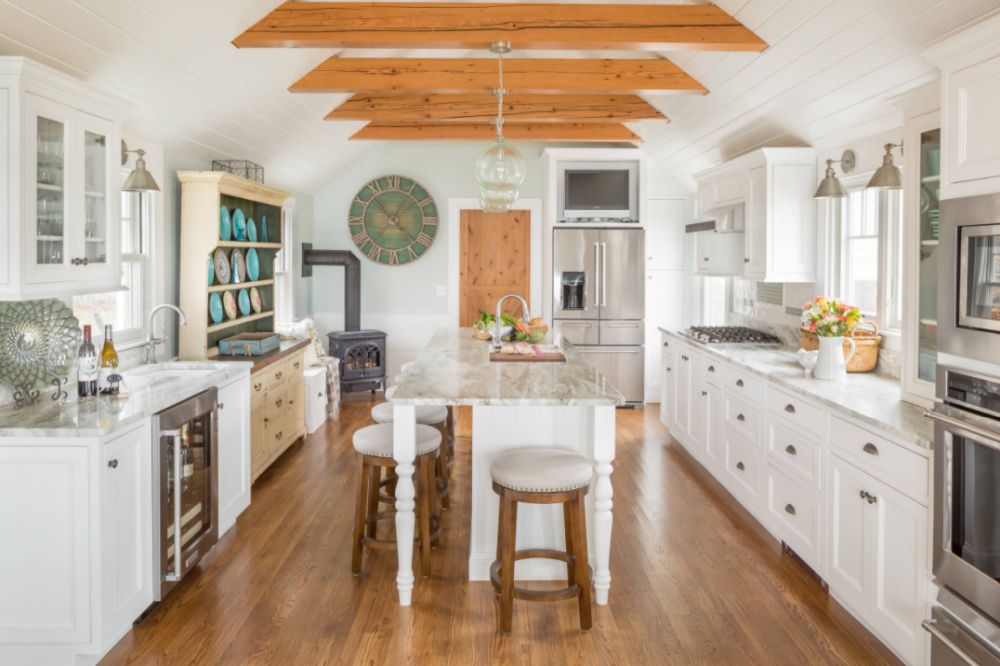 You can obviously install ceiling beams in any room, including the kitchen. In fact, this is one of the few ways in which you can add visual interesting to this space and make it look and feel more inviting without compromising its functionality. Here’s a beautiful example by studio Kitchen & Bath Gallery which showcases a series of light-stained beams on a pitched kitchen ceiling. 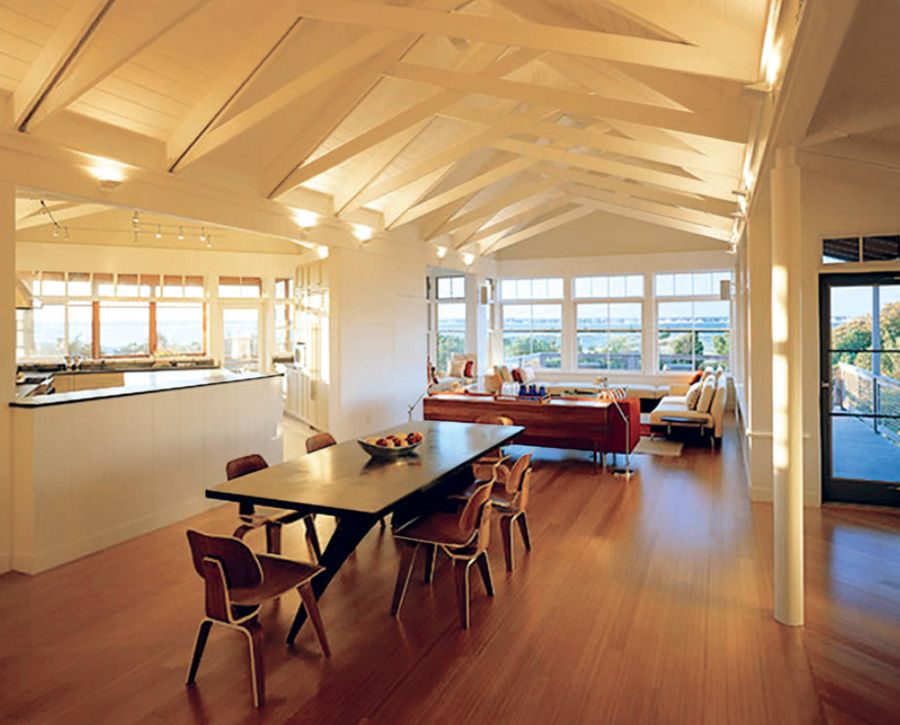 It’s not just the material and finish of the beams that can give you an interesting aesthetic but also the way in which the ceiling beams are installed. When dealing with support beams you’re quite limited in options but decorative beams are a whole different story. Here the beams were used to create a really beautiful visual effect on the ceiling of this living and dining area. It was a project by Lux Lighting Design and it’s very inspiring. 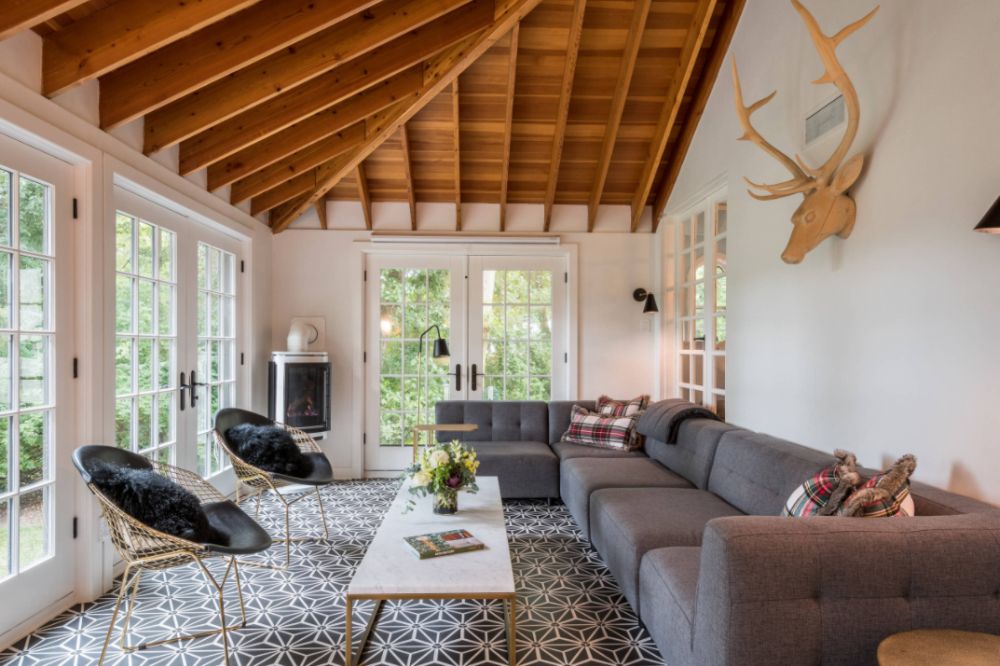 As mentioned before, the type of beams you use in a space should resonate with the room and its style. A beautiful example in that sense is this gorgeous sunroom by studio Denise Quade Design. Although the ceiling is quite different from the rest of the space, it goes really well with the French doors and their grid pattern. 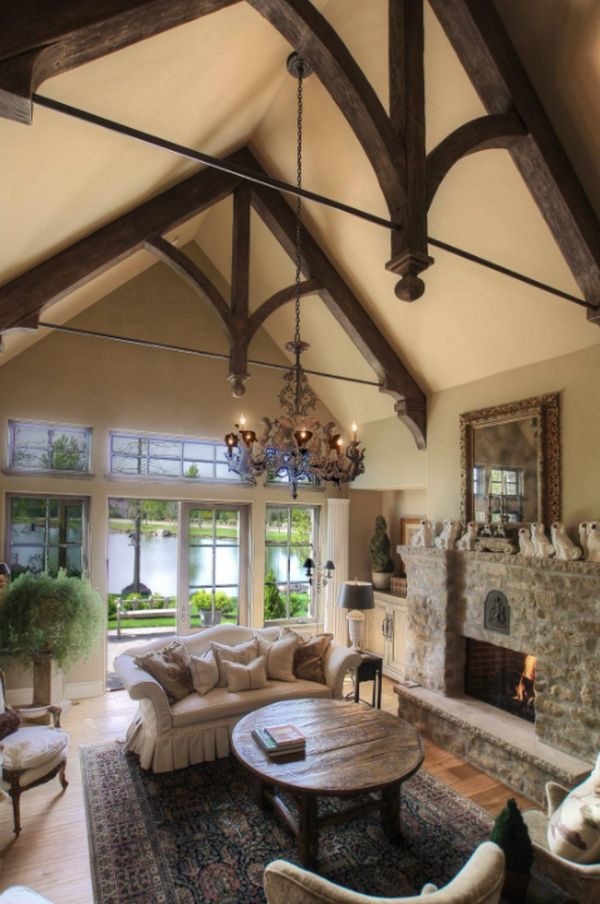 Without the ceiling beams this living room would surely not be the same. The ceiling is a beautiful focal point for this room and the beams add a lot of character to the space with their design and detailed look. They’re quite big and heavy but they manage to look lightweight and delicate. It was a project by Syringa Realty

The post How to Incorporate Ceiling Beams into your Style appeared first on Home Decorating Trends – Homedit.