One of the biggest elements to consider when designing or decorating a space is storage. There are of course all the classic options that can be classified based on the type of room that they belong to, like the typical cupboards in the kitchen or the closet in the bedroom. 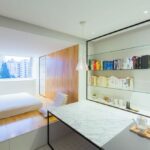 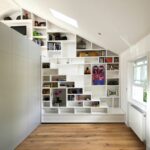 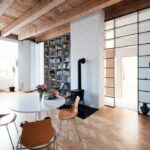 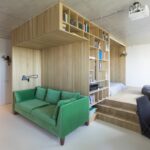 However, some spaces require more ingenious storage solutions. The following projects are definitely teaching us a lot in terms of how unique and efficient a space can be when you think outside the box.

A bedroom inside a wooden box 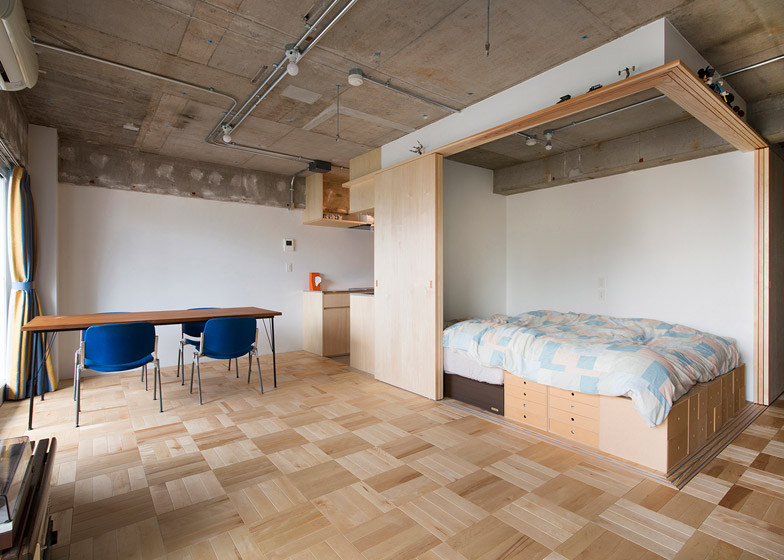 In addition to all the smaller details inside an apartment sometimes it’s also worth trying something new in terms of division of the rooms. A small place could be totally transformed just by removing the partition walls and creating a big open floor plan instead. To solve the privacy issue a more unconventional but also practical solution can be found instead.

This apartment from Tokyo was renovated by studio Yuichi Yoshida & Associates and they managed to fit the entire bedroom inside a wooden box with sliding wood doors. They also included clever storage solutions such as under bed storage in order to save more floor space and to be efficient with the way everything is compartmentalized. 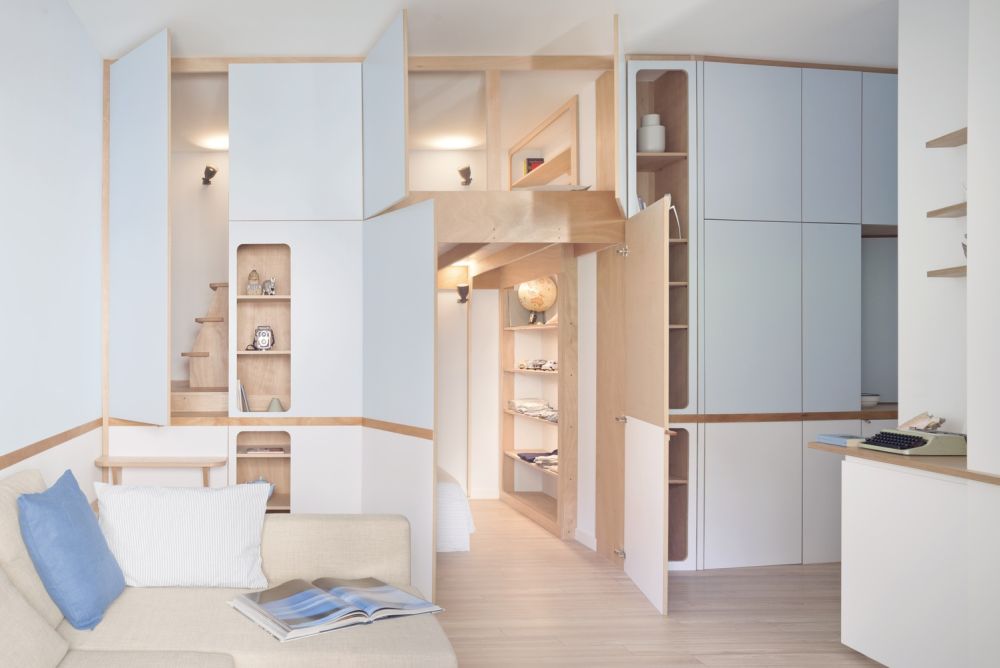 In some cases it’s best to centralize all the storage spaces into a single big unit. The layout however needs to allow it. A good example in this sense is a small apartment from Italy which was renovated by studio llabb.

The interior is divided into main zones, name the living and sleeping areas. These are divided by a multifunctional storage wall, one which incorporates several features and elements into its design. It has big and small compartments, open shelves and closed modules and it goes from the floor all the way to the ceiling. It even perfectly conceals the doors which lead into the bedroom. This module stretches across the floor plan and accompanies inhabitants as they enter the apartment and then continue towards the living room and bedroom.

A loft bed with a closet underneath 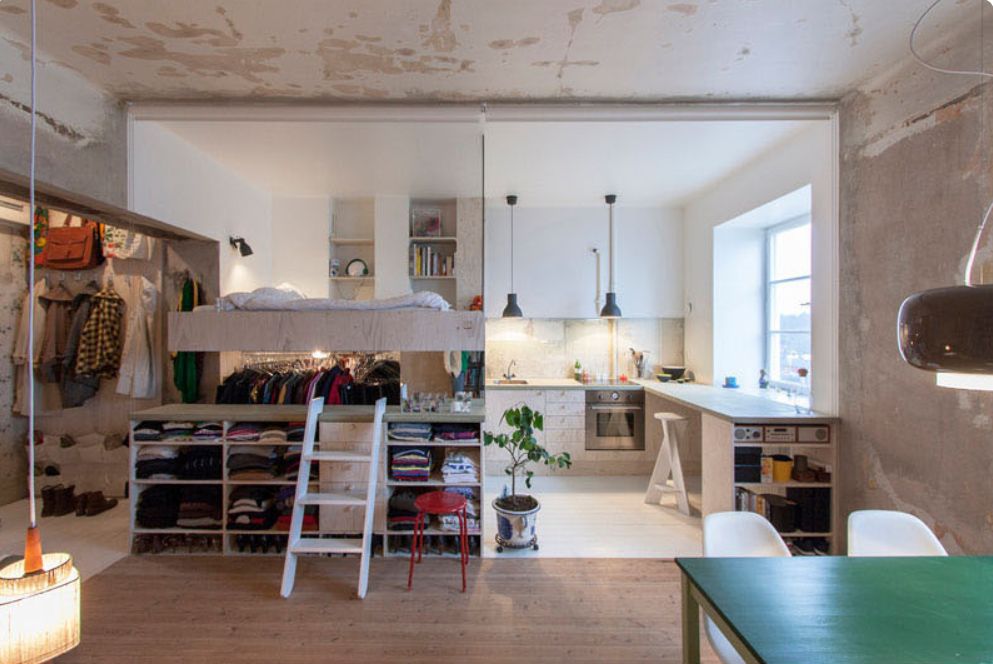 Sometimes the most brilliant storage ideas come to us when we’re faced with a challenge, when we have to make due with a very small space. Take this apartment from Stockholm for instance. It only measures 36 square meters which is not a lot and definitely not enough if you want a big kitchen, a living room and a bedroom in there plus storage for each of these spaces.

Architect Karin Matz came up with an ingenious solution for this problem. The bed has been raised which allowed for a big storage closet to be fitted underneath. That allowed the bedroom and kitchen to be compactly placed against one of the walls in the apartment, leaving the rest of the floor space open for daily activities. A loft bed with storage underneath turns out to be a great way to save space. 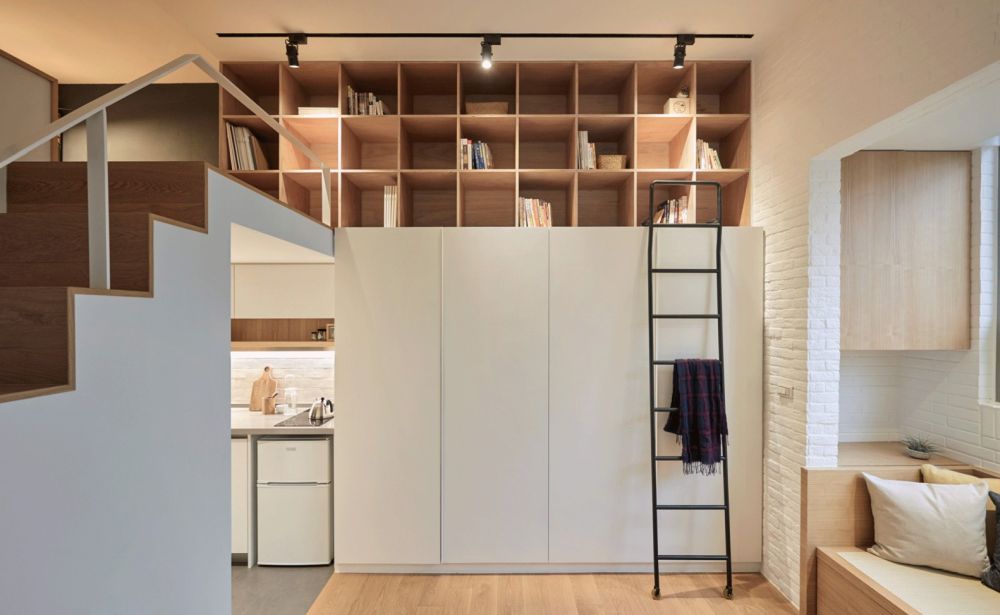 We can also learn a thing or two from the designs of spaces like this tiny apartment from Taipei. It only measures 22 square meters but it’s packed with a lot of functions and it’s a really nice place to live in long-term. You might be wondering where everything is. The key here was to create a mezzanine area and to place the bedroom there, out of the way.

That leaves the entire area on the main level open. It has a kitchen, a bathroom big enough to include a tub, a living room and a dedicated dining setup. There’s also plenty of storage underneath the stairs and up top. A big wall unit goes all the way up to the ceiling, featuring a shelving unit that can be reached from the mezzanine level or via a ladder. This was a renovation done by studio A Little Design. 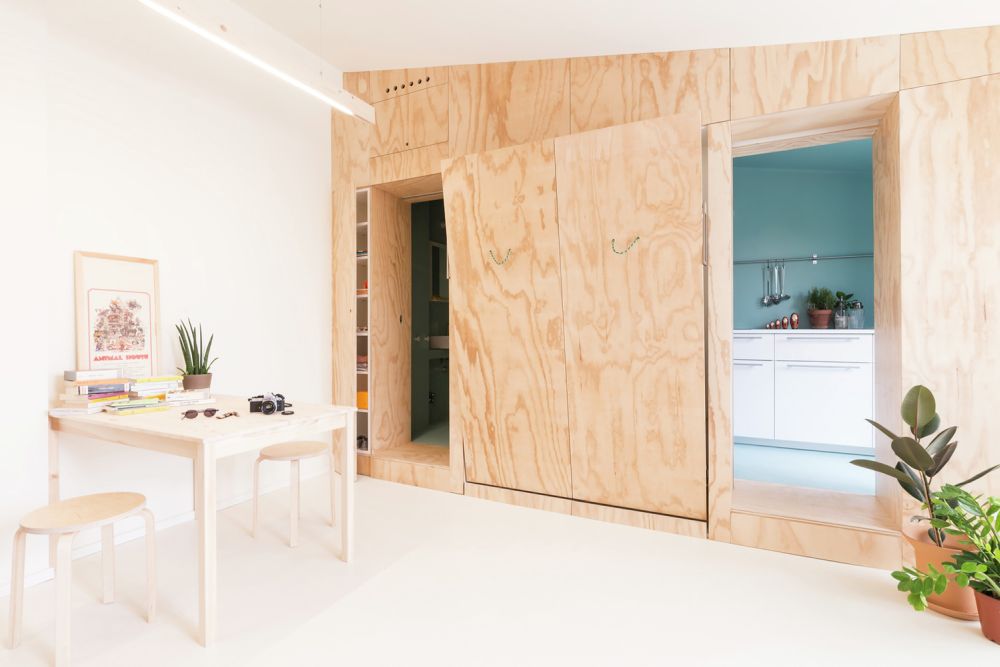 One of the greatest and most practical ways to save space in a small home is by combining two or more functions into one. For example, the living room, kitchen and dining area are often one and the same. In the case of this 28 square meter apartment from Milan however things are a bit different.

Here, the private and common areas are combined into one. That was possible thanks to a clever storage system which hides all the furniture inside the walls. There’s a Murphy bed, a sliding sofa, a folding table and more and behind these two storage walls the kitchen and the bathroom are cleverly hidden. This magnificent design was made possible by studio wok. 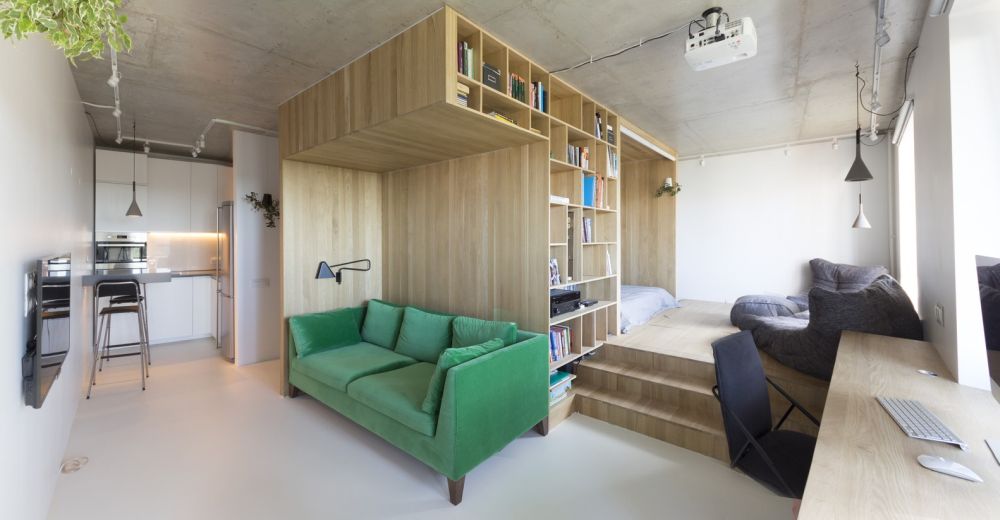 When renovating a 47 square meter apartment from Moscow, studio Ruetemple had to face a few challenges. The limited floor space was one of them.

Their client wanted the place to feel bright and airy and also to include a private sleeping area. Based on that, the designers came up with a clever idea: to integrate the bedroom and most of the apartment’s storage functions inside a custom-built wooden box. This is where all the main functions are clustered together. The box even incorporates a niche for the living room sofa and has storage cubbies all around it. 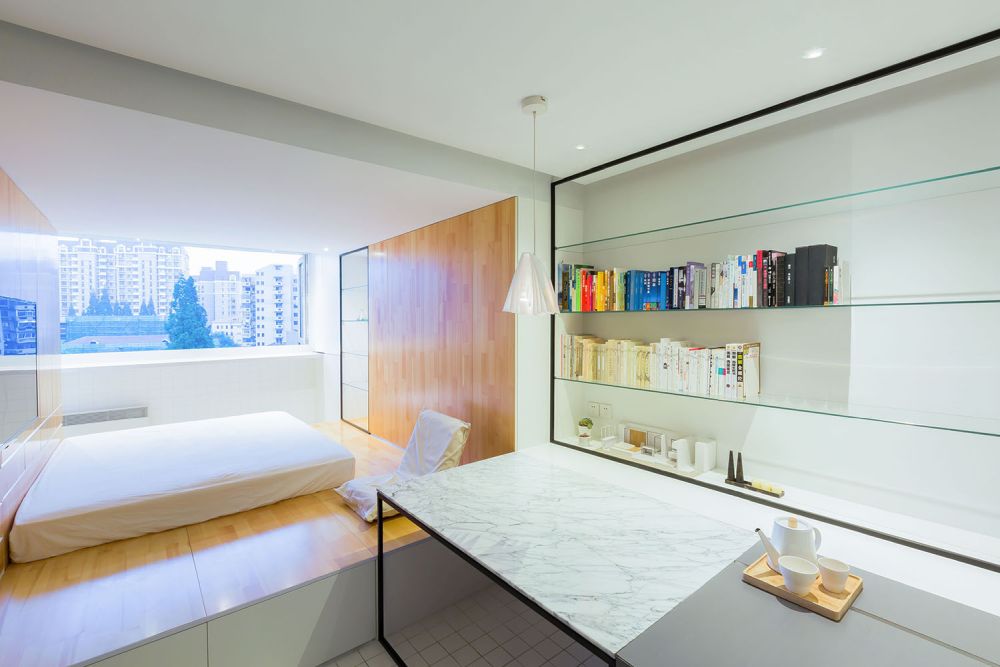 Sometimes a good way to maximize the storage capacity of a small space is by opening up the entire area and creating distinct sections that each have unique features. To be more exact, you can have a big open space where each individual so-called room is designed using a specific palette of materials and finishes.

That way you give each one individuality without the need of solid walls in between and that leaves more room for storage. On that topic, this small apartment from Shanghai has an interesting design where the entire bedroom is placed on a raised floor platform. That introduces a series of hidden storage spaces that can be accessed from the kitchen. It’s a clever idea, one which studio stelier mearc came up with. 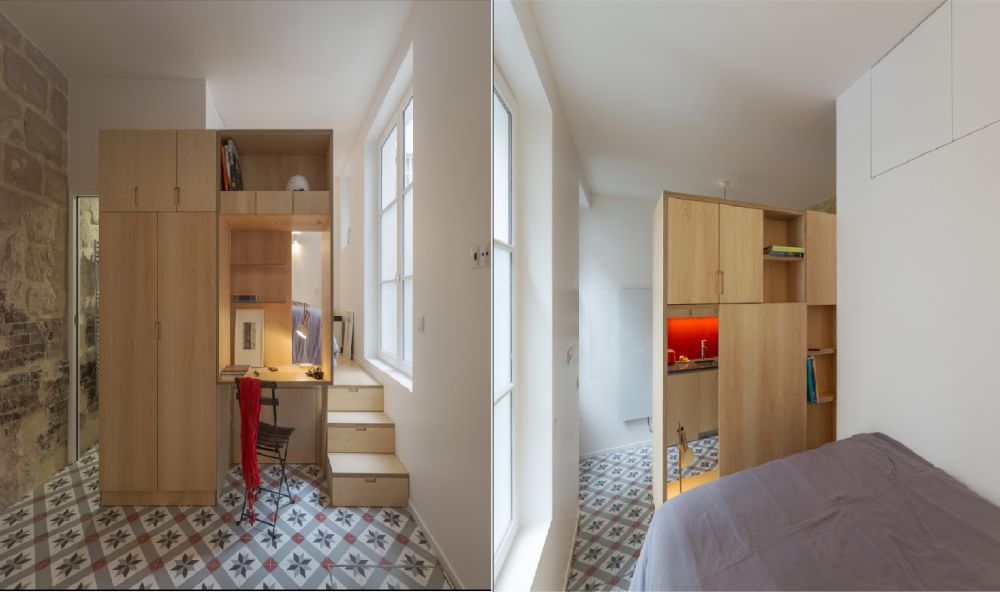 Another really clever storage idea is to have freestanding furniture which can be accessed from two sides. It would also double as a room divider which eliminates the need for partition walls between the rooms.

The spaces can be divided by the furniture and that saves quite a bit of space. This strategy was used by studio Anne Rolland Architecte for a small apartment in Paris which measures only 24 square meters across. 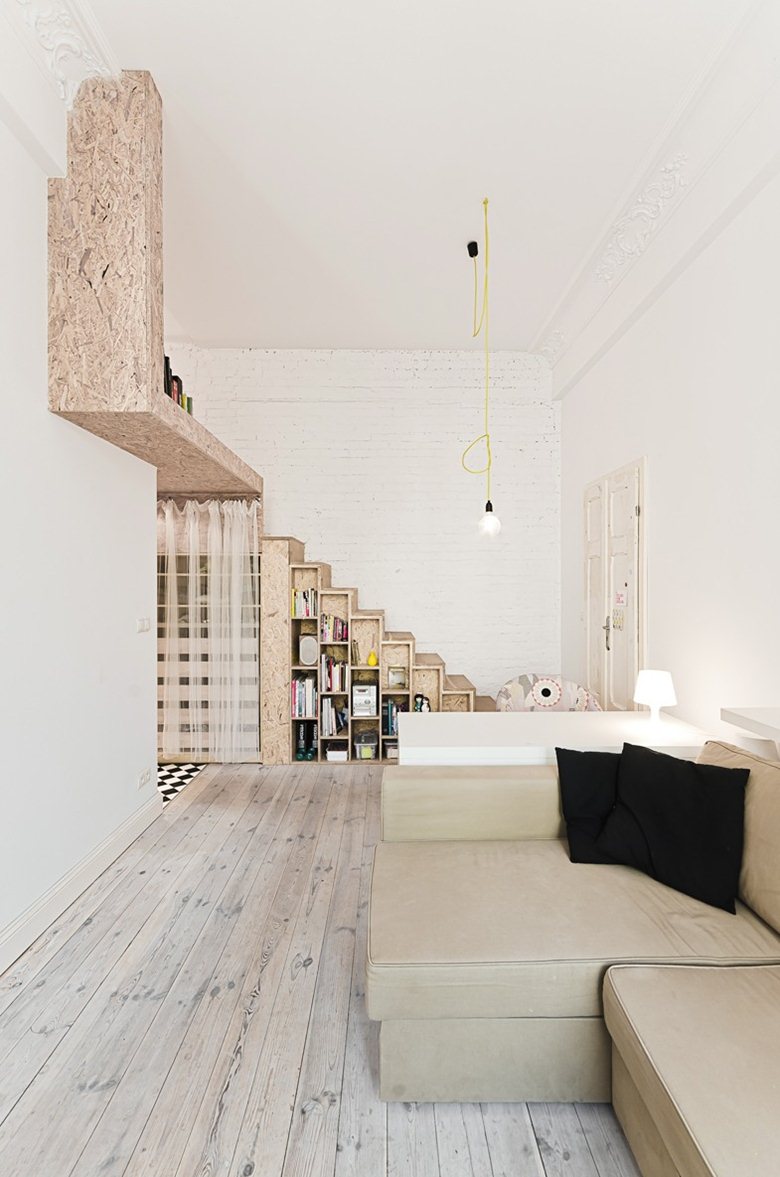 With only 29 square meters to work with in this apartment from Poland, studio 3XA chose to avoid a traditional interior and to create something unique instead. The architect took advantage of the fairly high ceiling and managed to detach the bedroom from the rest of the floor plan by raising it above the bathroom and the entrance hallway.

The area up above is quite big but not as high as it could be. It’s a sort of semi-mezzanine. That however is enough to free up a lot of space down below and to allow living room, kitchen and dining area to be combined into a bright and airy space. To access the bedroom one can climb up the custom bookcase stairs which blend two functions in one and look really cool at the same time. 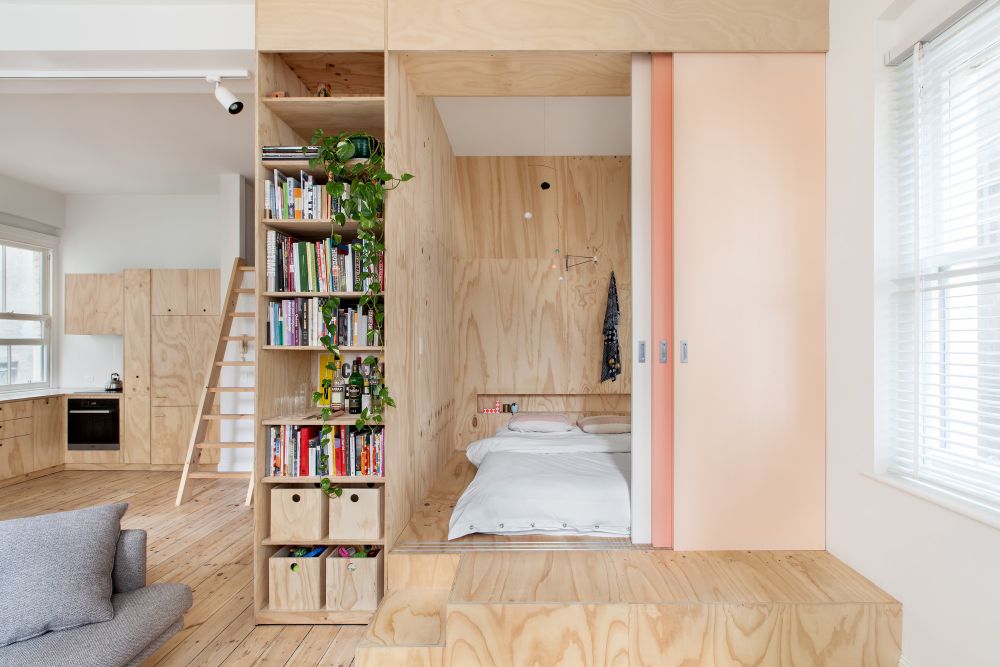 Here’s yet another example of how the space inside a home can be maximized by incorporating clever storage solutions and custom strategies into its design. Although this apartment from Melbourne is not really tiny, it did need to include more than one bedroom.

As such, designer Clare Cousins decided to minimize the sleeping areas and to maximize everything else in order to give the family room to enjoy daily activities together.

One of the bedrooms is hidden inside what looks like a closet. It’s actually a big box-like structure made out of wood and plywood which has an empty space inside for a double bed and some minimal storage. It also features open storage shelves on the exterior, allowing the sleeping area to be hidden in plain sight. 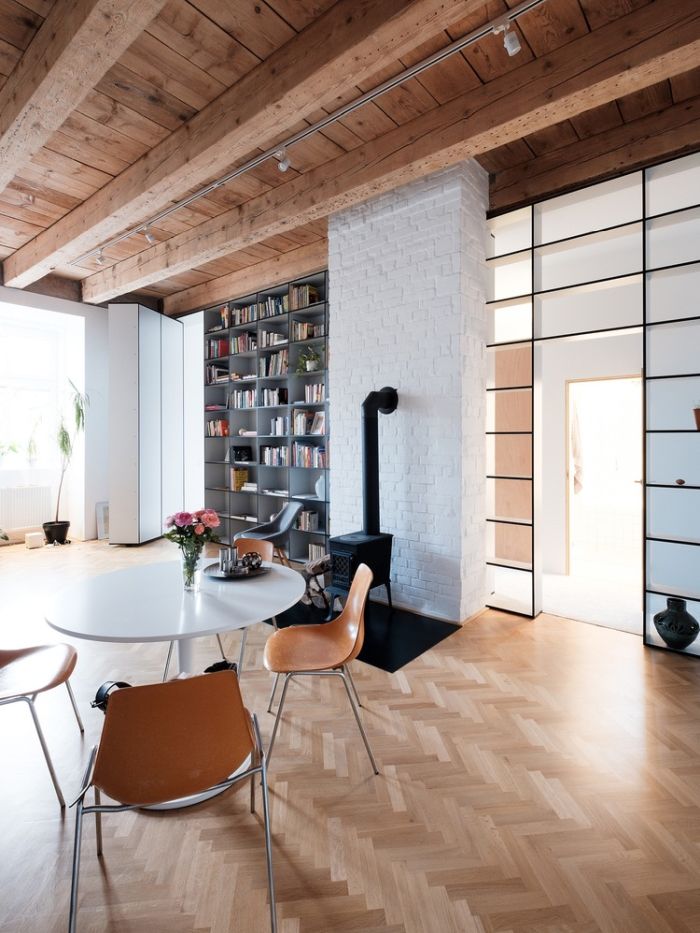 Upon entering this apartment from Slovakia one is greeted by a spacious area which blends together the living room, kitchen and dining area. It’s nice and open, with a cozy little fireplace, lots of open shelves and a welcoming feeling as a whole.

There is however no indication that there’s anything else besides this space so where is the bedroom? Well, it’s hidden behind the bookcase and to get inside you have to open a secret door which is seamlessly made to look like a part of the bookcase. This ingenious design was created by studio JRKVC.

A staircase is hidden in plain sight 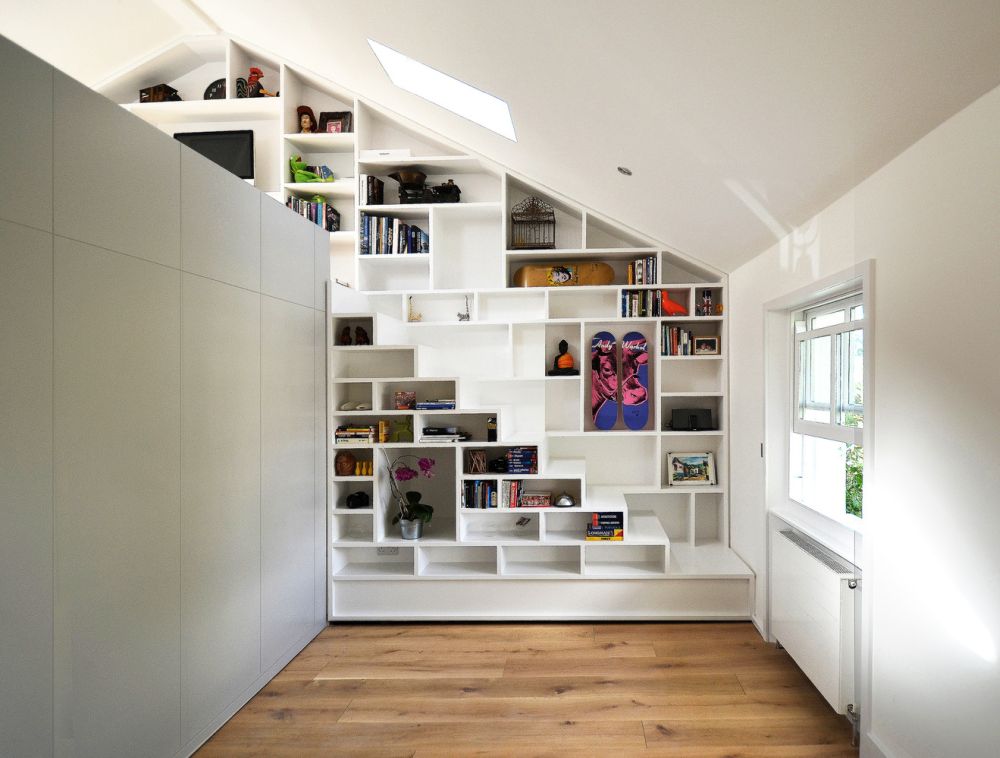 This is a really cool design which incorporates some of the ideas we’ve seen before. It has this big wooden box which looks quite mysterious. It’s all white and doesn’t give a clear indication as to what it’s purpose is. It is in fact a multifunctional unit.

Inside of it is the bathroom plus some extra storage space and on top is the bedroom and a small office nook with a little desk and a custom shelving unit. To reach the bedroom one has to use the stairs and these are cleverly disguised as bookshelves. The hidden staircase is not at all disruptive and doesn’t take up extra space, plus it doesn’t even look like a staircase at all. This was all crated by studio Craft Design for a small apartment in the United Kingdom. 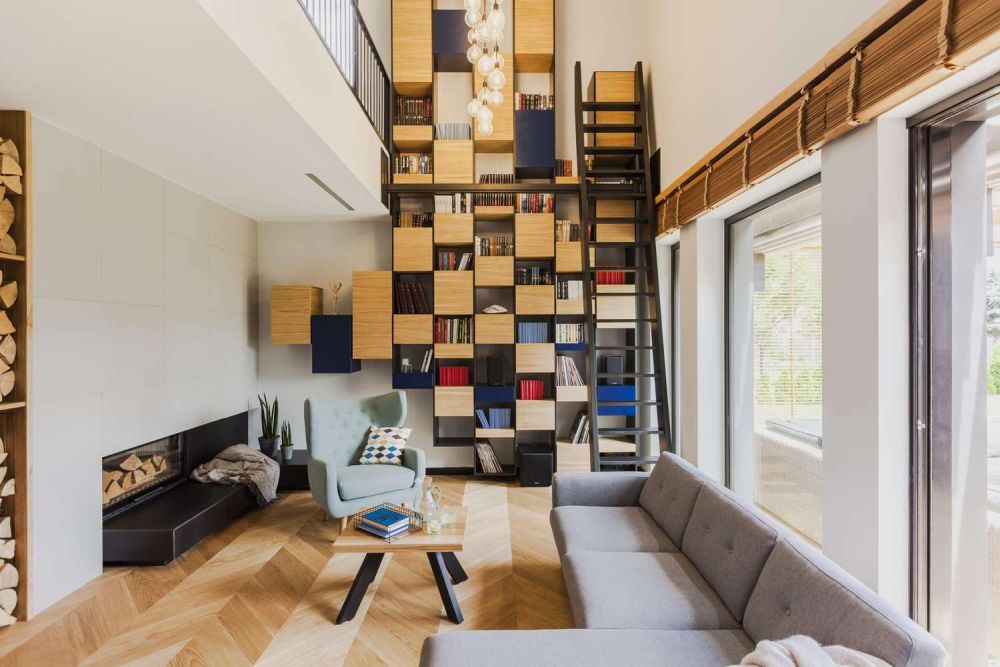 Another good strategy is to take advantage of the architecture and layout of a space. In the case of this house designed by ZONA Architekci the living has a double-height ceiling. It also has a custom wall unit which takes advantage of that.

The modules go all the way up, turning this into a big storage wall. To access the areas at the top a metal ladder can be used. It’s not just a way to maximize storage but also a cool way to make a statement and to decorate a big empty wall.

Storage under the staircase 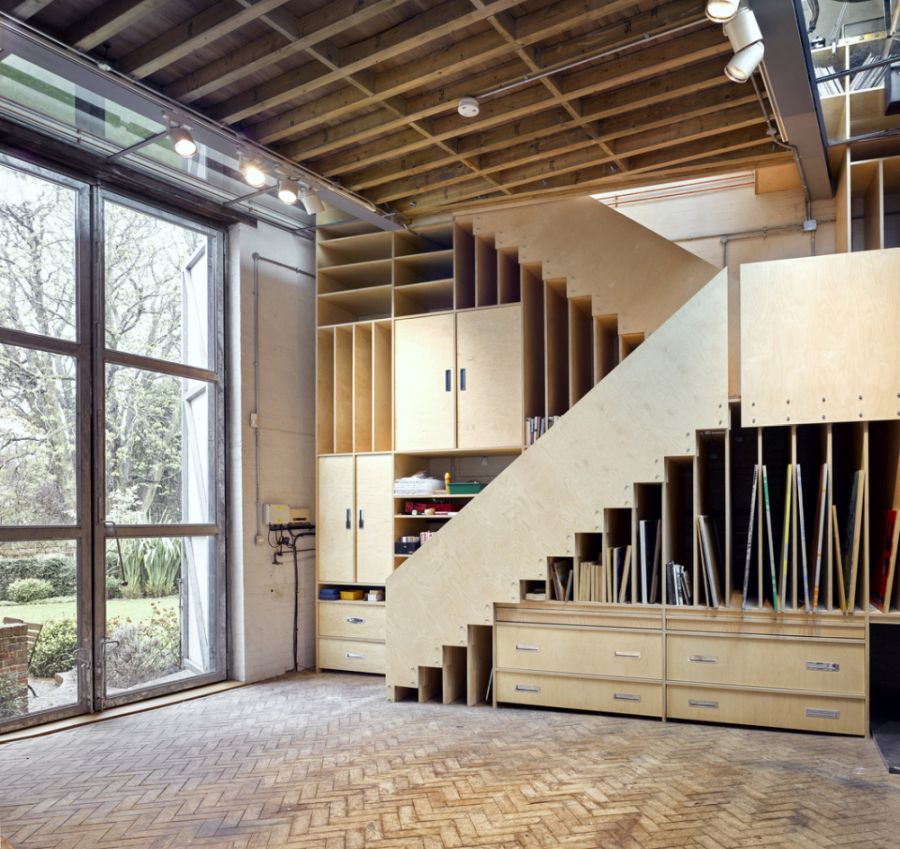 Although staircases are practical by definition and can become wonderful statement pieces inside buildings, they do take up quite a big of space and in a home that means less room for storage. The solution to that is simple and stares us straight in the face: a staircase with built-in storage underneath.

That was the strategy used by Syte Architects when they refurbished this beautiful place in the UK. The staircase is actually where most of the storage is concentrated. There’s a multitude of big and small modules, drawers, shelves and so on and that looks really cool on top of being very convenient and practical.