Classical statues have been around for centuries so you might not consider them a trend, however, using them in modern and contemporary decor styles is definitely in vogue. While they’ve always popped up in more traditional styles of decor, designers are adding them to interiors in unexpected ways and there’s no reason you can’t include some in your home.

Whether you’re referring to classical sculpture or other types, they boil down to four main categories, all based on how they are made, no matter the material: molded, cast, carved or assembled. And these days, the materials are really wide ranging as artists expand their creativity. Even within the realm of classical statues, there are different types and styles to consider for your interiors. There are also some that play off the classical style with modern touches or whimsical features.  Just like anything else in decor, pick a piece that speaks to you and place it where you can enjoy it.

Classic statues can work in any space, from traditional to the more unexpected modern and contemporary rooms. Moreover, these statues do not have to be white. According to Smithsonian Magazine, we might associate classical antiquity with white marble, but Greeks originally rendered their gods and models in vibrant colors. It’s just that time and the elements have weathered away most of the colors. Here’ a dramatic backdrop is created for a media center with two large figures and a fully embellished wall.

Classic male and female poses are excellent choices for statuary in the home. Single figures, as well as battling warriors and athletes are options, depending on the size of the space you have to work with and your personal preference. Reproductions that are smooth and unweathered are available, in addition to those that have a more tumbled and worn appearance.

Different materials also present a fresh take on a classic sculpture. This chic transitional dining room by William Hefner Architecture Interiors & Landscape of Los Angeles incorporates a headless metallic torso sculpture on the sideboard as the dominant accessory. It’s a classic touch with added shine and style, which complements the room’s decor perfectly.

Modern Take on A Classic Shape 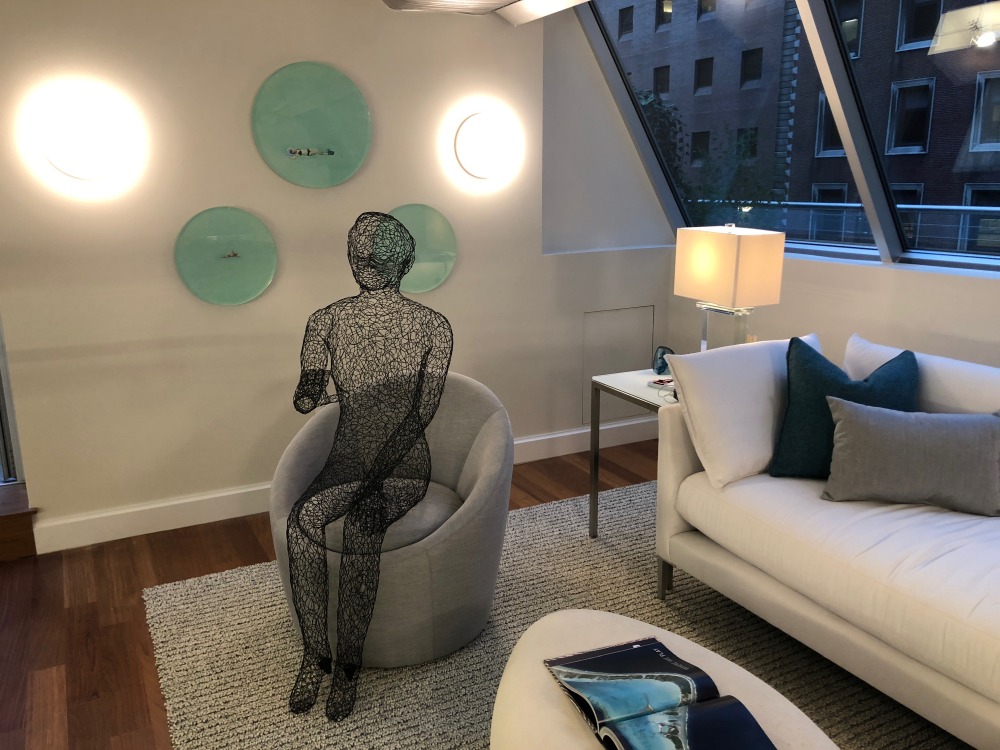 Another abstract spin on the classic human form is when the sculpture suggests the form but the material used to construct it creates a more ethereal piece. This work features an entire form, but there are no facial features or other details on the surface of the sculpture. This allows for plenty of imagination when it comes to thinking about what it conveys. From a practical standpoint, however, this type of sculpture has a lighter visual footprint in the living space and is a good addition to a room where something heavy just won’t do. 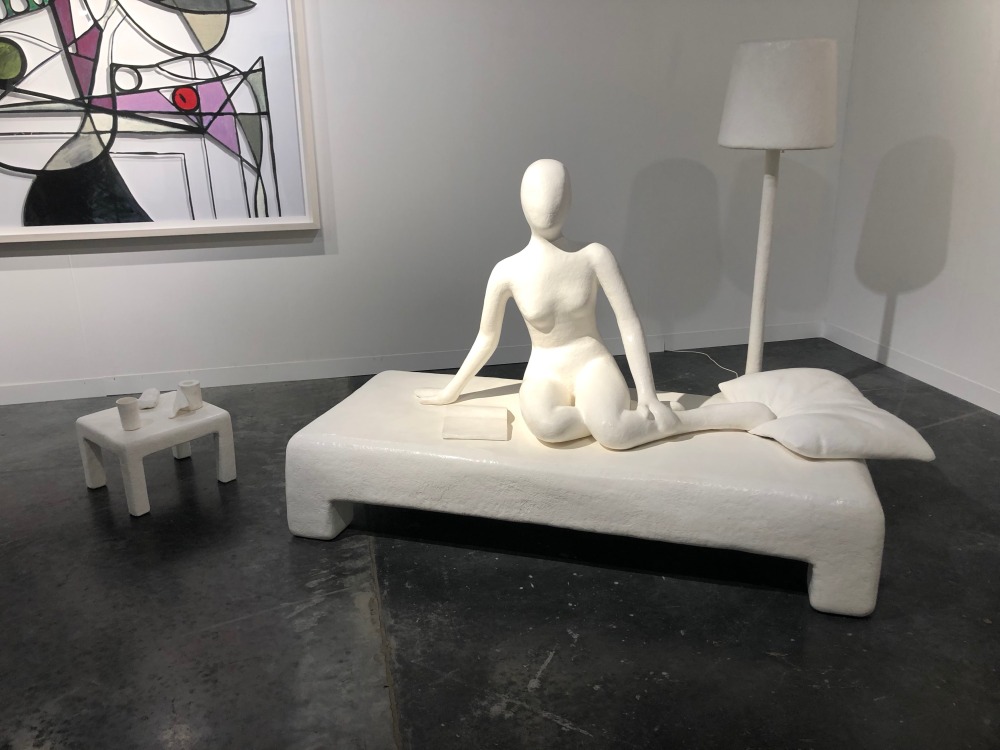 A similar figure without detail is the subject of Female on Bed by Atlier Van Lieshout. Made from fiberglass, it is a much larger sculpture but still leaves the viewer to imagine the emotions, thoughts and situation of the reclining figure.

For those who really do not care for classic renditions of the human body for their decor, there are always options for a modern take on the human silhouette.  These styles often emphasize one part of the body more than another and frequently have at least some stylized features.  Artists often toy with the proportions to create unique works that are easily recognizable as the human body, but with creative twists.  A good example is the woman at the center of this entryway.  The form emphasizes the length of the legs and the lower body, while the upper body is much smaller in proportion.

Modern statues are also great for monochromatic spaces. This Jumby Bay dining room in Miami, Florida is serene yet interesting, thanks to the tall thin, modern sculptures that stand between the windows. Here, the artist also played with the form’s proportions, stretching the figure out and elongating the legs.

A contemporary New York City dining room, lined with bookshelves, is highlighted by a rough-hewn, modern human form. It is made contemporary — or perhaps ancient — with the bold colors that splash across the statue. A modern form fits the existing space and emphasizes the hues and atmosphere of the Upper West Side apartment designed by Lilian H. Weinreich Architects.

A little more traditional in proportions and style, but still with a modern feel, the statue in this Chicago TriBeCa loft attracts attention. The sculpture is the focus of the minimalist space, and the gray color melds with the rugs and architectural framing on the windows. The room, designed by Nathan Kirkman of Chicago, has a masculine feel, despite the statue’s female form.

Perhaps not the most common of classical statues in home decor, religious figures can make a big design statement. In fact, much of traditional statuary work had religious themes. The pieces are beautiful and are an artful expression of faith for those who find this important. This Tucson, Arizona home, built by Mike Wachs Construction Co., Inc., has an Old World style Mediterranean dining room that includes a large religious statue.

Asian religious sculptures are very popular in home decor, be they Buddha heads or full figures. Deities of all sorts are often used in homes as decor items as well as for religious reasons. This eclectic dining room by Elad Gonen is a modern mix of many styles: Luxury, rustic and modern. The global vibe of the Buddha head is an unexpected accent for the space.

Including Asian statues in the bathroom can help create a zen-like spa experience. If you have room for a full statue, it makes a dramatic statement. If your quarters are a little tighter in the bathroom, perhaps a smaller piece  or a smaller wall-mounted statue is enough to create the right ambiance.

Busts are very commonly included in home décor because their size can make them easier to install, especially as an accent atop a piece of furniture. A bust is actually any sculpture that depicts only the head and neck of a human figure, and it may or may not include some of the chest and shoulders. Most often, it sits atop a base, usually just a thickness of the same stone or material from which it is carved. And speaking of materials, while stone may be what you think of most, these days sculpture, including busts, are made from all kinds of materials.

Another reason that busts are one of the most popular types of sculptures for décor is mainly because they come in many sizes as well as styles, and can easily be placed on a shelf or table, lending just enough of a classical touch to any room. With busts, there are far more options than just those of stone or marble. The forms are being rendered in unusual materials and unexpected colors, like these flocked, neon-hued busts from Polart. 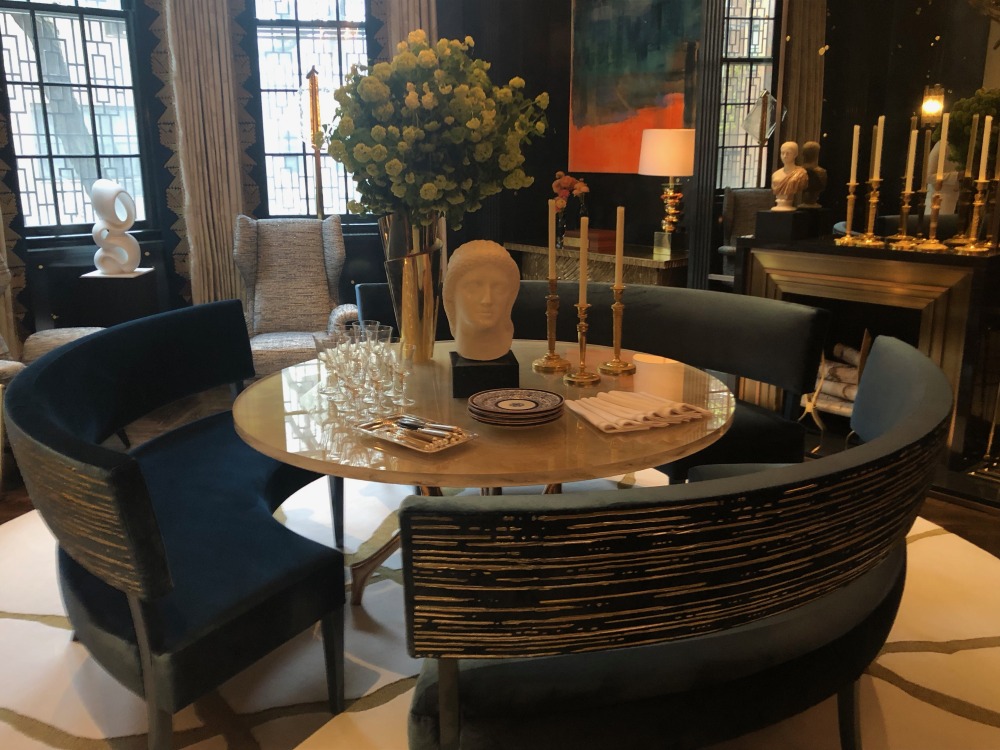 Technically, when a bust does not include the neck or at least part of the shoulders, it’s called a “head” instead of a bust, however this distinction often goes by the wayside. Here, the bust is used as an accessory on the dining table and could easily remain as part of a centerpiece with candles and/or flowers. Smaller busts are often overlooked as a very current type of décor accent. 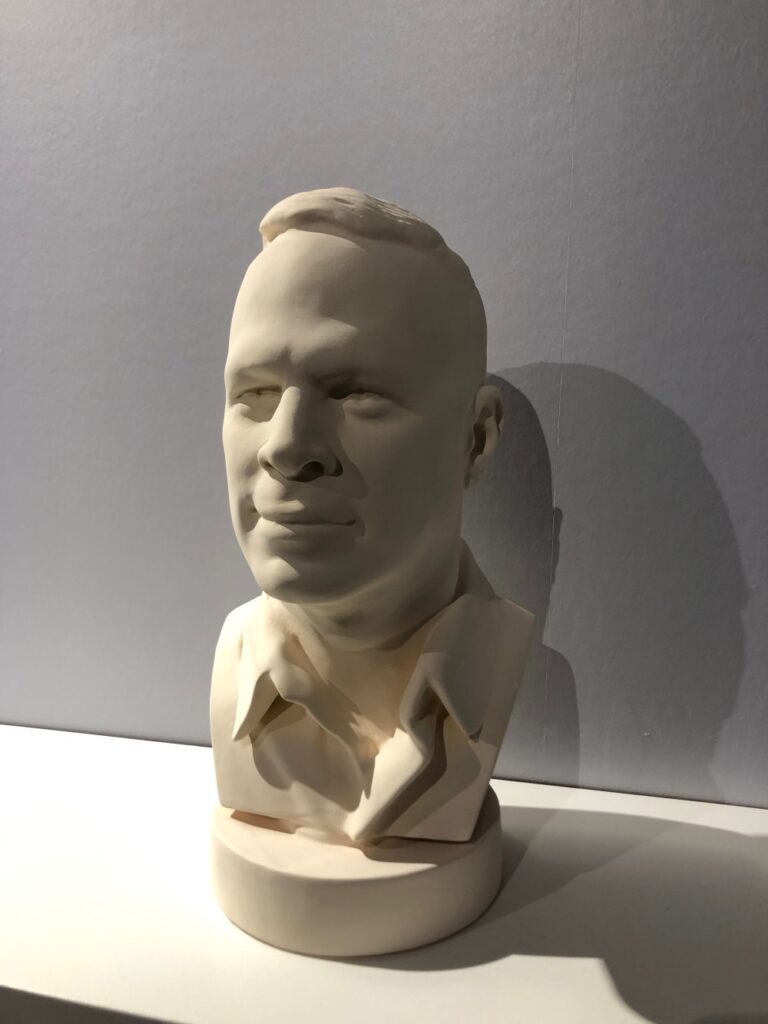 It used to be people had to sit for a sculptor much as they did for a painted portrait, but modern technology has done away with that if you want to have yourself rendered in sculptural form. Artists can create a bust of you or a family member with amazing precision. This is a great way to honor someone or to remember a dear family member.

Busts are one of the most popular types of classical statues to add to a home’s decor scheme. This is mainly because they come in many sizes as well as styles, and can easily be placed on a shelf or table, lending just enough of a classical touch to any room. With busts, there are far more options than just those of stone or marble. The forms are being rendered in unusual materials and unexpected colors, like these flocked, neon-hued busts from Polart.

Male or female, a classic white bust can elevate the design of a room with little other effort, no matter what the style. The nature of the piece immediately lends an air of sophistication to a space. Depending on the size and style of the figure, it can serve as a modest accent or a major statement. Choosing a bust of at least moderate size and minimizing the use of other accessories really puts the focus on this classical statue. Otherwise, smaller ones are generally more understated.

Of course, you can always opt for a more stylized version of a bust that still evokes the general sense of a classical statue, such as this one from Jan Barboglia. While it has the structure of a Roman bust, the face is a little abstract and the top of the head is open, offering up the possibility of using it for a vase, as was done here.

A Bit of Whimsy

Statues do not have to be serious. There are plenty of options for those that add a touch of whimsy, either through the basic form or the embellishments the artist uses. This duo of hippopotamuses has been transformed into a ballerina and a harlequin. Even their pedestals match the figures. These types of statues — big or small — are great for people who have a sense of humor and don’t take themselves – or their home decor — too seriously. 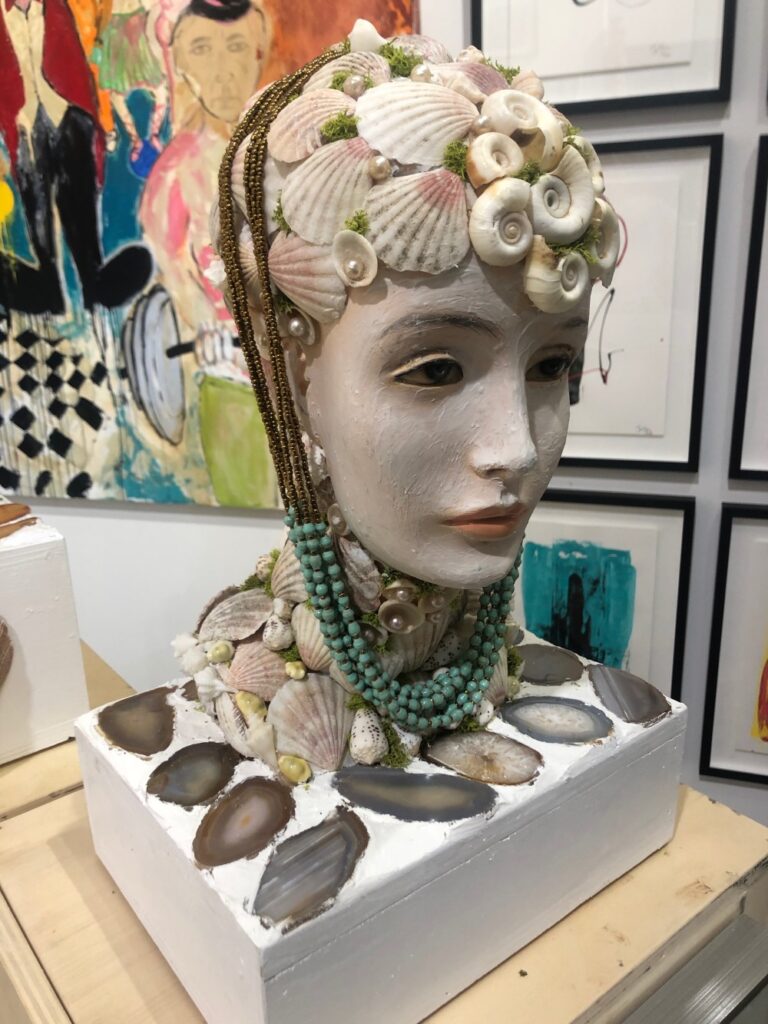 Technically this would be classified as a bust, but it’s also a whimsical sculpture that uses a variety of unexpected materials. As we noted earlier, artists now use all kinds of materials – including reclaimed and repurposed items – to create their imaginative works. This one transforms the basic concept of a bust into an embellished piece that has a serious mermaid vibe. 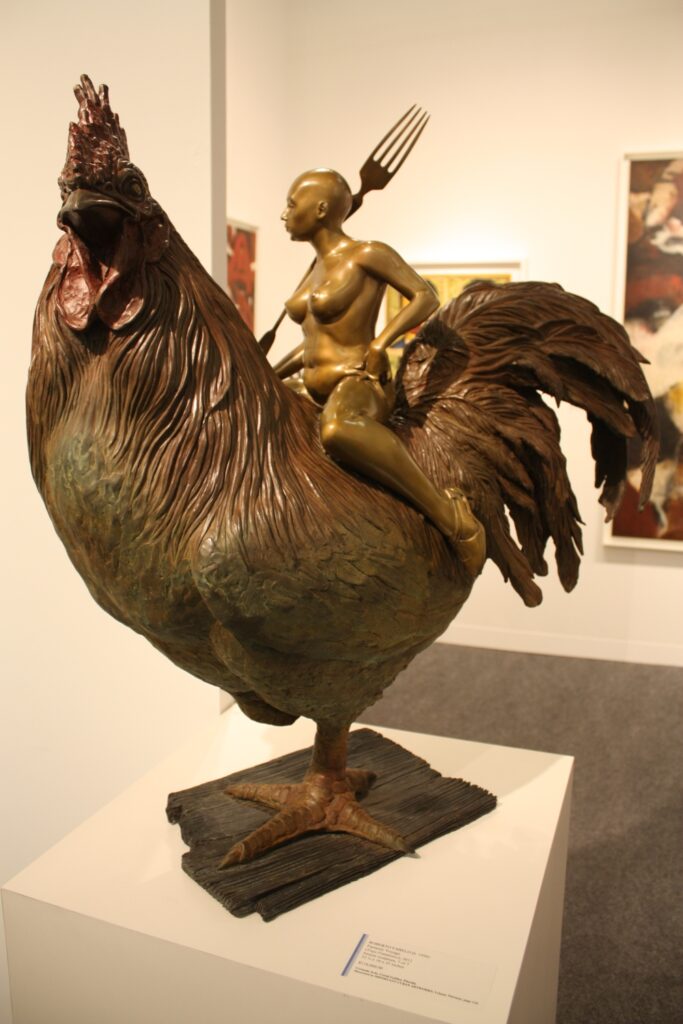 In a very whimsical spin on the traditional horse and rider sculpture, artist Roberto Fabelo created his Fantastic Voyage depicting a woman riding a giant chicken and wielding a fork. The bronze piece is actually a very important Cuban sculpture whose meaning is left up to your own interpretation. 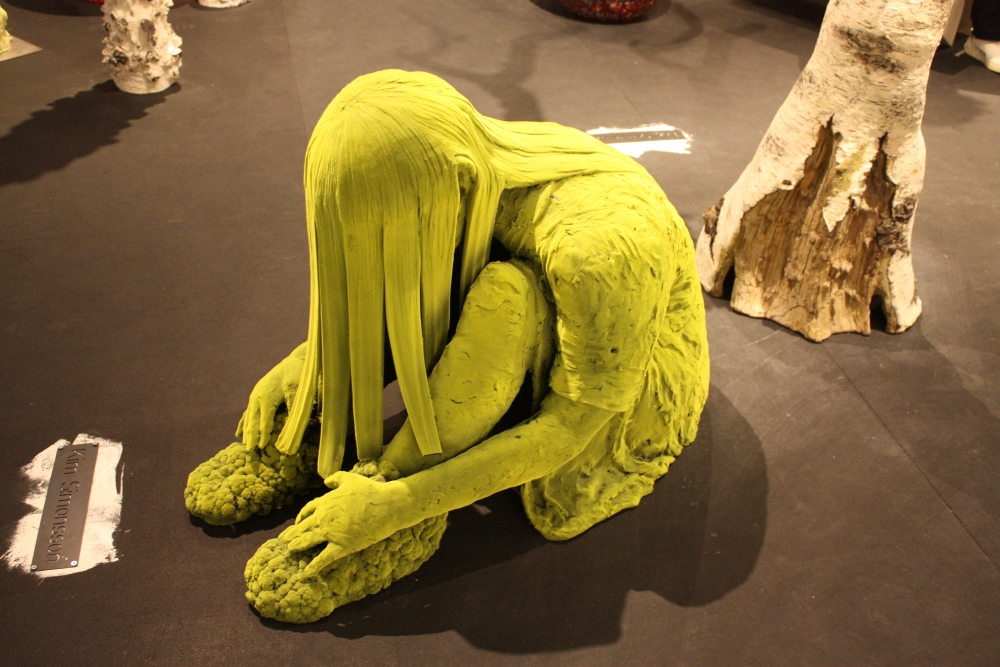 Children are becoming more popular as subjects for sculpture, and we’re including the Moss People by sculptor Kim Simonsson under the whimsy section because of the vibe they give off. They are life size, ceramic pieces that evoke “an imaginative, fairytale-like world inspired by the forests of Finland.” His carved clay figures are all coated with a woodland-like covering of moss that really creates an otherworldly appearance.

The post Make Your Space More Sophisticated with a Classical Statue or Bust appeared first on Home Decorating Trends – Homedit.