A historic farm in the western Klein Karoo area of South Africa was rescued from ruin and transformed into an award-winning compound. Saota architects acquired the farm in 2016 with the aim of restoring the six historical structures on the property, along with four hectares of fallow fields, into a working olive farm. So spectacular is the project that it even won the gold medal international Domus Restoration and Conservation Award for its “excellence in the field of restoration, redevelopment and architectural and landscape recovery at an international level.” 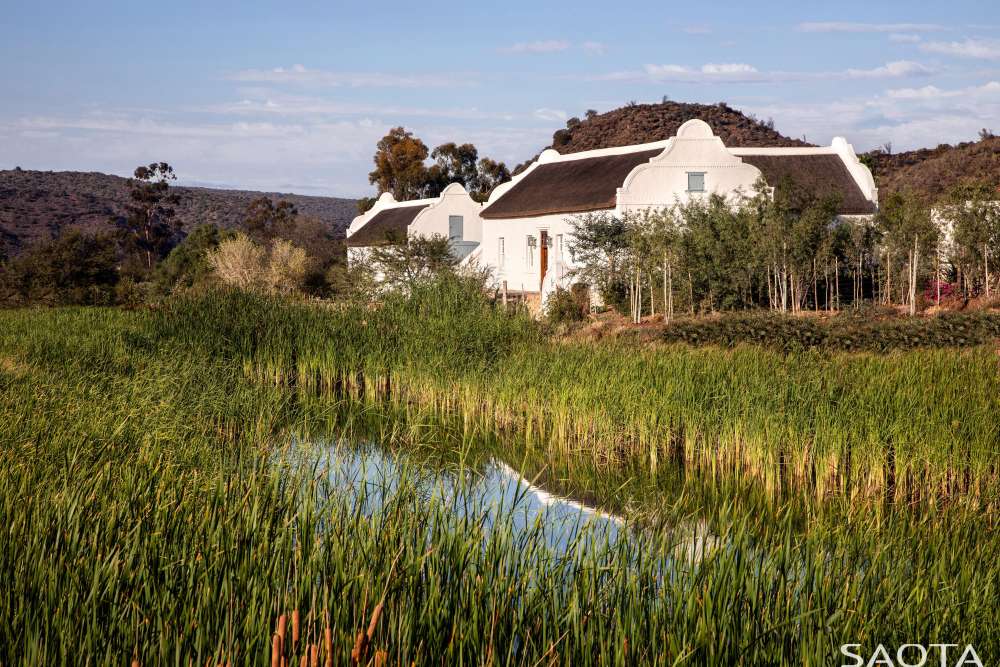 Buffelsdrift farm is located about 15km to the west of Ladismith Klein Karoo. The Klein Karoo is a stunning 350-kilometer valley running east to west, from Uniondale to Montagu. Surrounded by the Swartberg Mountains to the north and the Langeberge and Outeniqua Mountains in the south, the valley is only 40 to 60 kilometers wide. Originally built in the mid-1800s, the six historical Cape Dutch structures were constructed using the poured earth method, which the architects say is slightly different than the more well-known sun-dried brick method.

“This method of construction – ubiquitously used by Dutch settlers, trekboers and later Voortrekkers – requires a source of clayey ground into which is added ‘a good proportion’ of sand and grit, possibly straw or dung, combined in a pit, all trod through by oxen-hooves in span,” writes architectural historian Roger C. Fisher, Professor Emeritus of Architecture, University of Pretoria, quoting William John Burchell’s Travels In The Interior Of Southern Africa. Fisher had visited Buffelsdrift and written an unpublished account of his observations, Buffelsdrift – An Anatomy of a Vernacular, in which he details aspects of its construction and history. 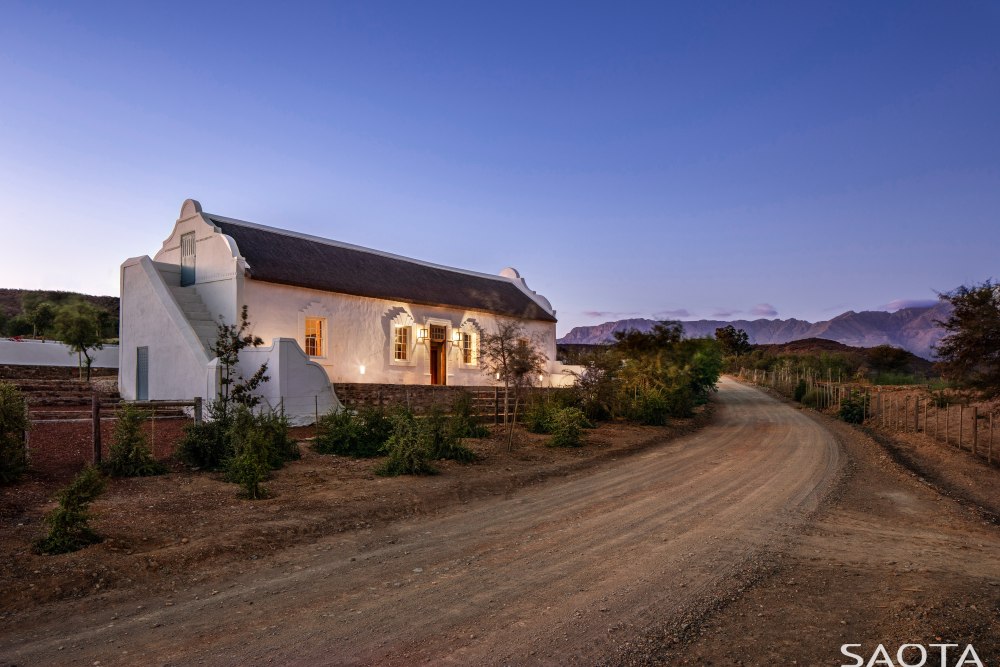 Although the buildings were in good shape, the main house showed evidence of 1970s refurbishments that had to be stripped out. In fact, the buildings had been redone in a variety of different types of plaster over the years. Once that was removed, the architects assessed the state of the mud structures and fixed all the structural damage with clay collected from the dry earth irrigation dam which was obviously also the original source of clay for the buildings.  They also replastered the structures in lime and sand as was traditional. 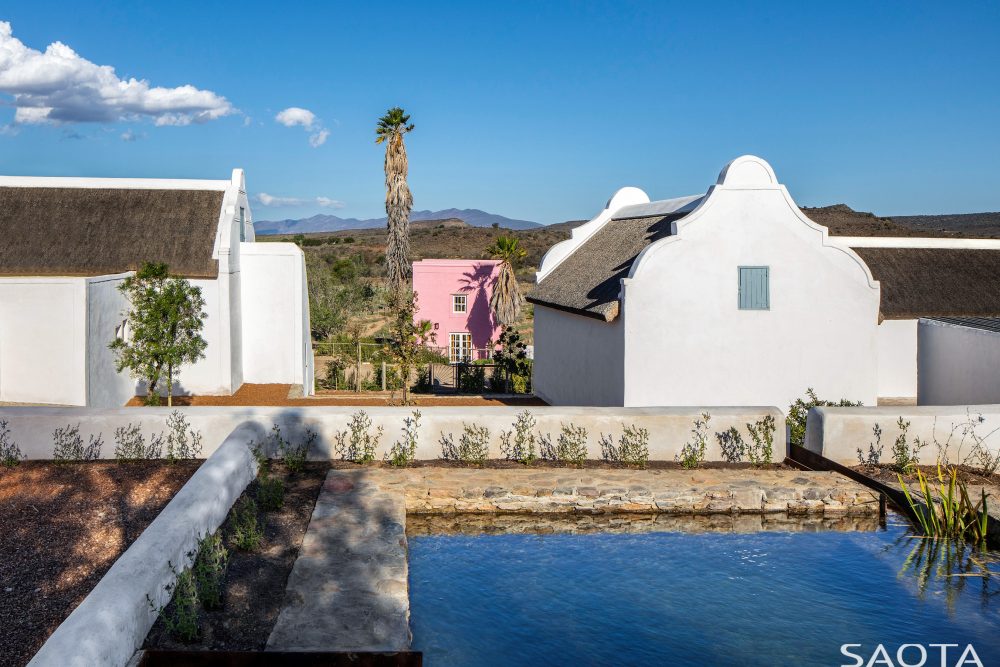 A new pump house was added near the dam wall on the property. Its design and construction were an experiment in contemporary architecture using the same materials and techniques as the heritage buildings, including poured mud or “cob” walls, as well as brick-vaulted roofs. The landscaping around the house took the form of a series of low terraces. 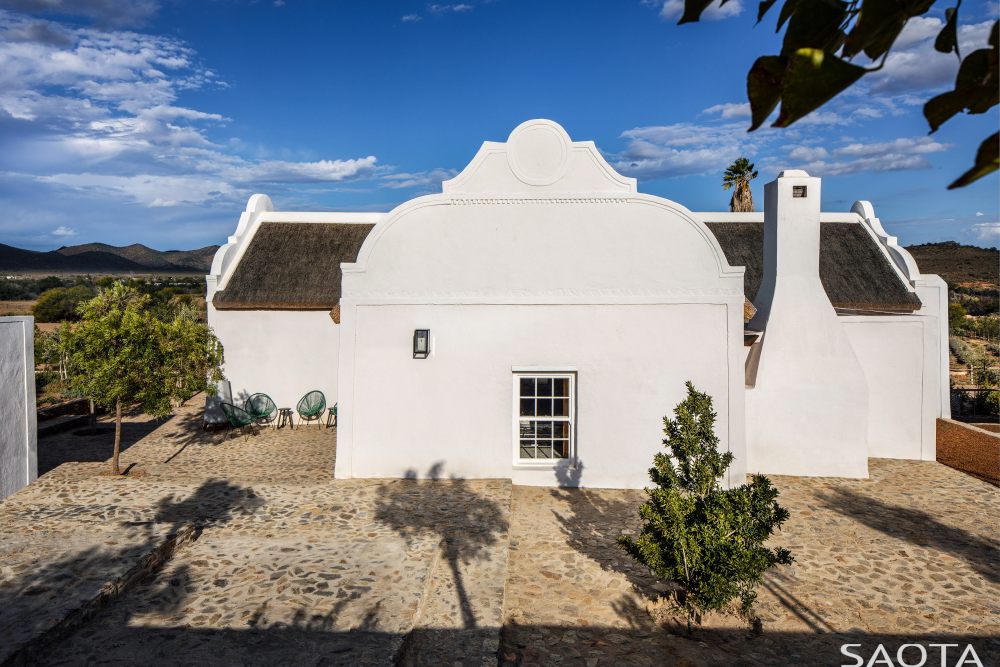 “The most decorative, strangely located to the rear of the house, is the central hol-bol (concavo-convex) gable of the T-wing where the kitchen is located, with its circular capping and string-moulded bottom chord, for which Hans Fransen coined the term ‘Prince Alfred Gable.’ Fransen’s seminal study, The Old Buildings of The Cape, records “three old buildings … all with Prince Albert-type end-gables (holbol with horizontal string courses)”. The main T-shaped homestead, he says, “has massive loft steps at the side and original hollow stoepbankies”.

Historian Fisher says that a speculative reading of the architectural fabric of the buildings led him to suspect that the house “was originally a simple longhouse thatched cottage” that was subsequently added to. The outbuildings, which probably predate the house, have “simpler rudimentary hol-bol gables with … semicircular pinnacles” and those of the “main body of the homestead are similar but more refined”. 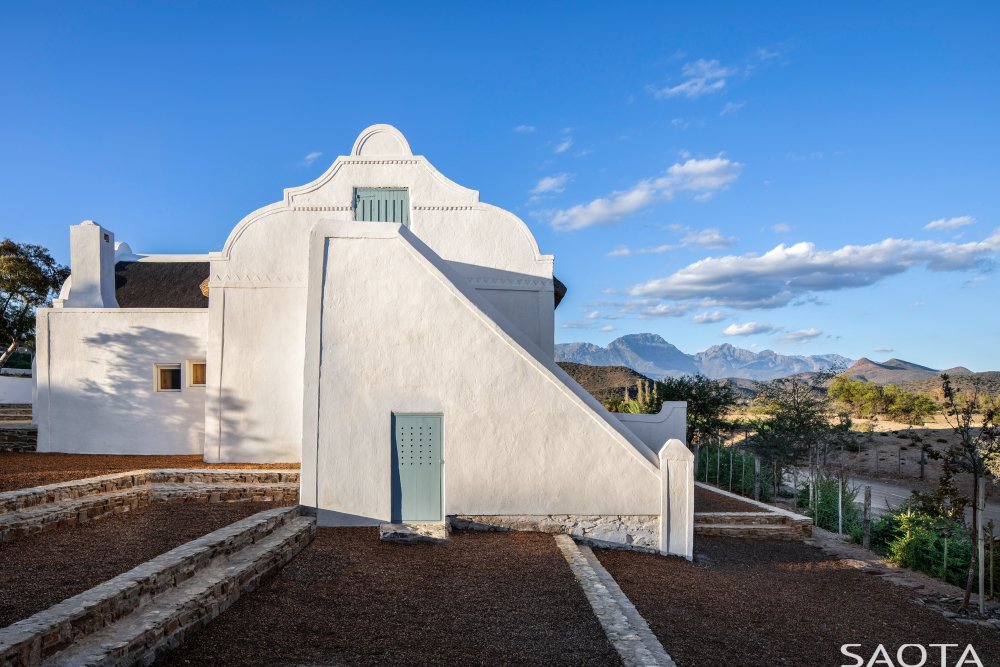 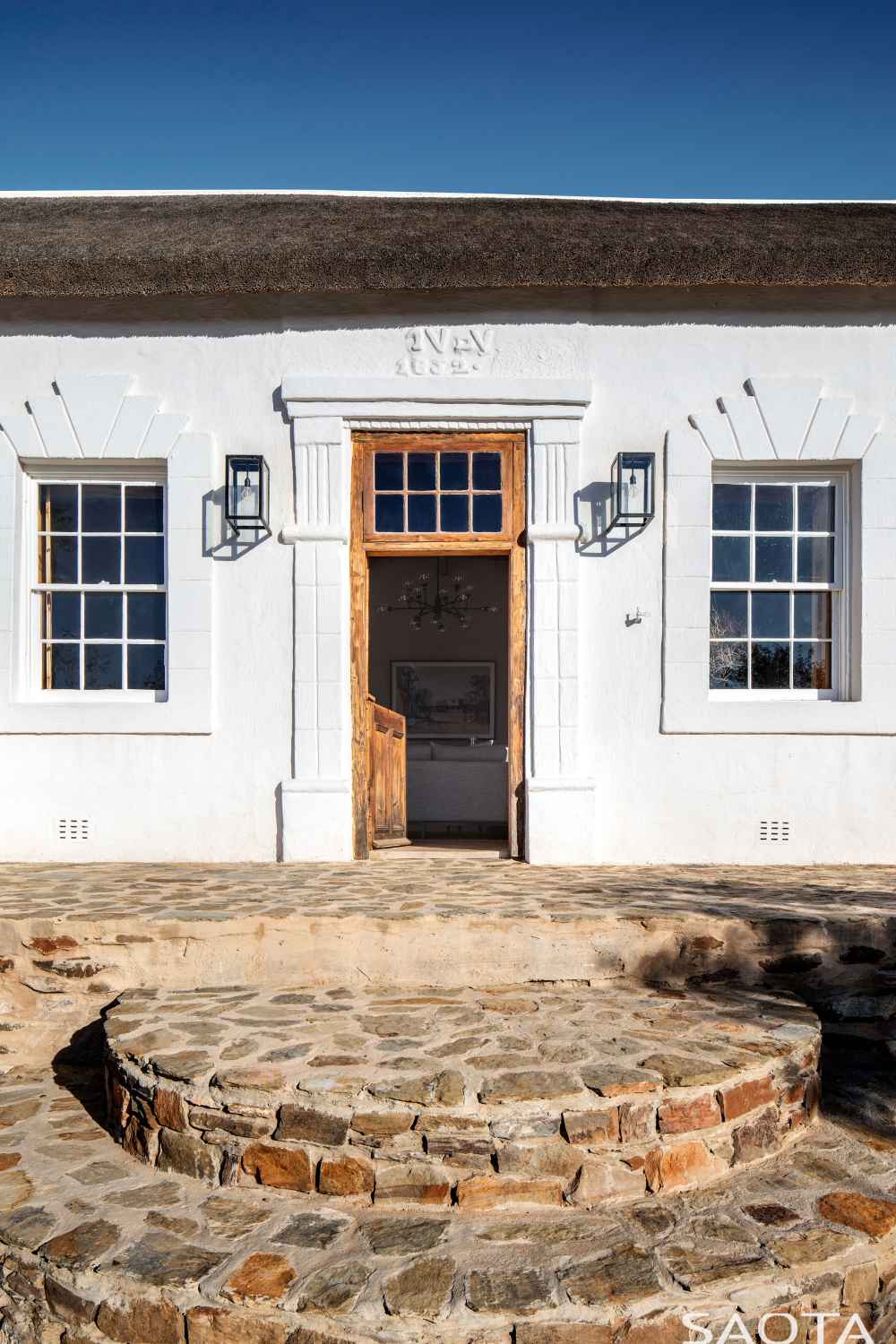 The main house on this portion of the farm dates back to 1852. The date and initials IWDV, Isak Wilhelm van der Vyver, are inscribed above the door. The Van der Vyver family was associated with Buffesldrift as far back as 1768, when they first leased the farm. This “tallies with the plaster-framed woodwork (although the halved front door with its small-paned fanlight and fluted and dentiled entablature looks much older.”

Fransen also points out the unusual shutter on the fanlight. Additional research revealed that the lock on the front door was French, dating back to the 1700s, so it was restored by a specialist in Paarl. Various articles that appeared in the press over the years as the farm changed owners note that the original stinkwood doors and wardrobes in the main house remained intact. 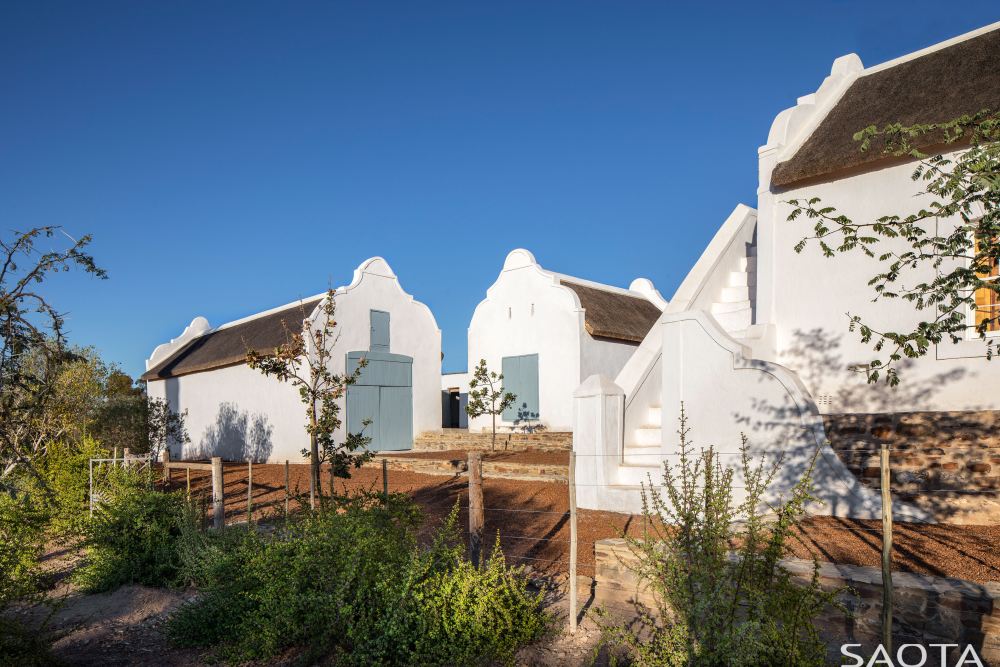 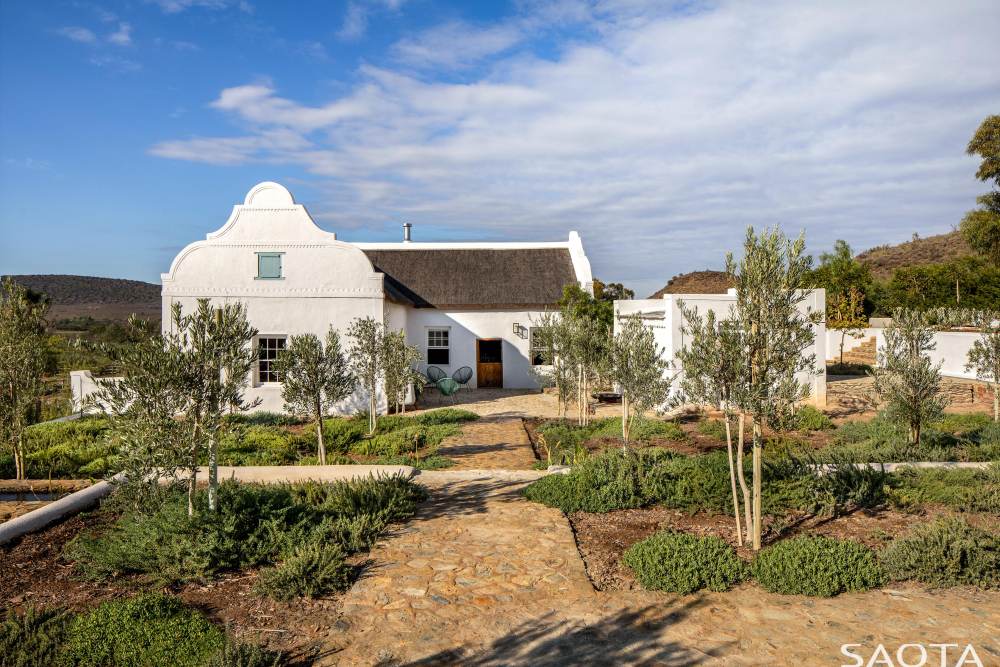 Licenses to graze livestock on the land date back to the mid-1700s, and it is clear that it was farmed before the 1800s. The original circular farm was divided into smaller parts over the years. Incidentally, 1852 was the year in which Ladismith was proclaimed, unlocking growth and development in the area. Fruit trees, grapes and other crops were farmed in the valley, although by the late 1800s and early 20th century, crops were largely abandoned in favor of ostrich farming, which brought great prosperity as a result of the international ostrich feather boom. The collapse of the fashion for ostrich feathers, war and drought brought economic devastation, and the once-bustling valley was largely abandoned. Now olives are commonly farmed in the valley. 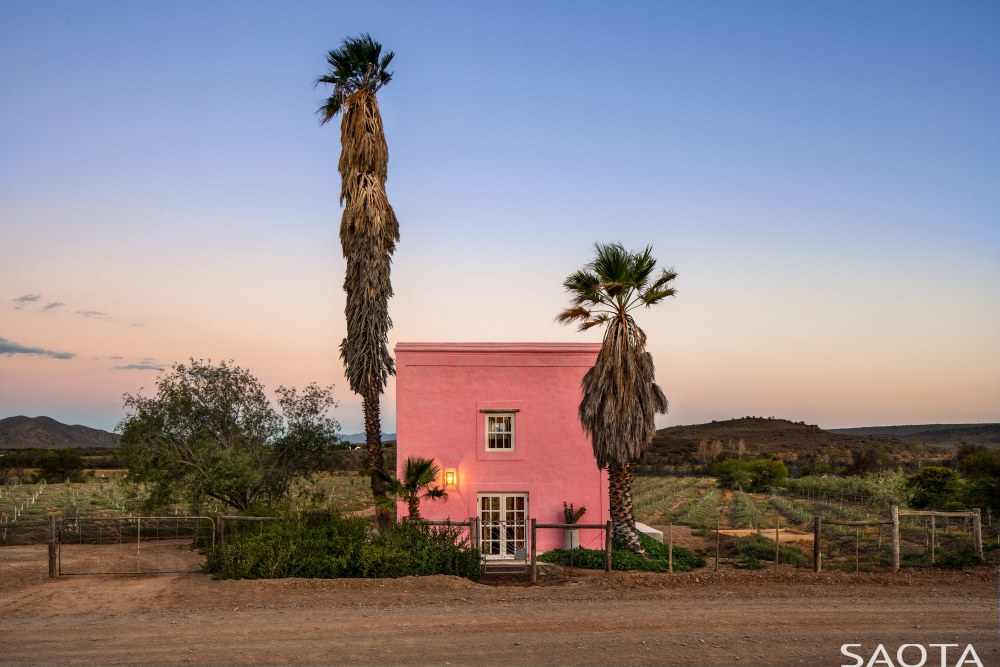 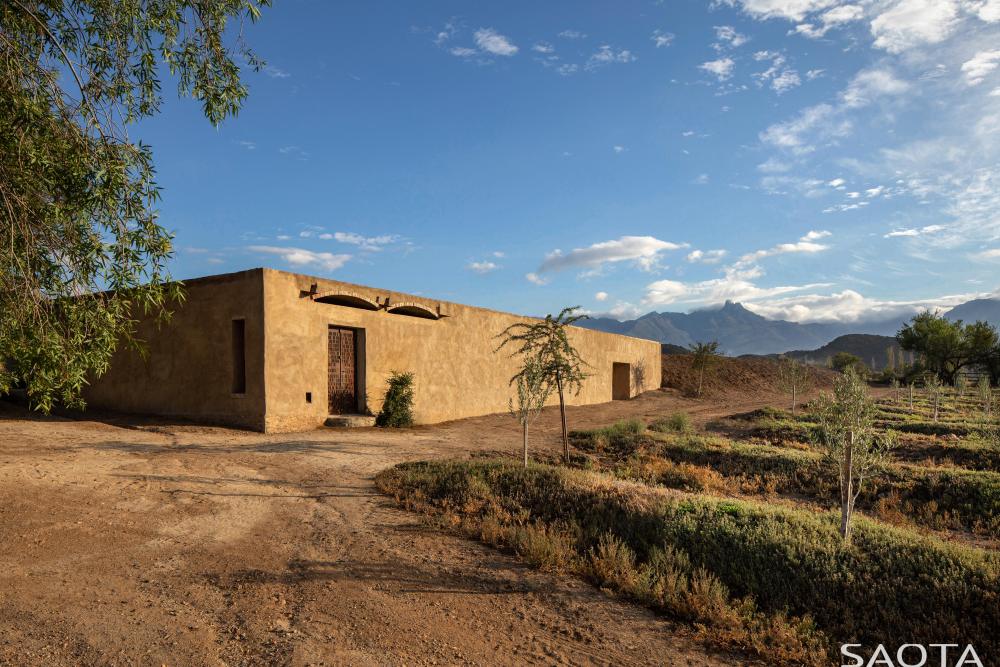 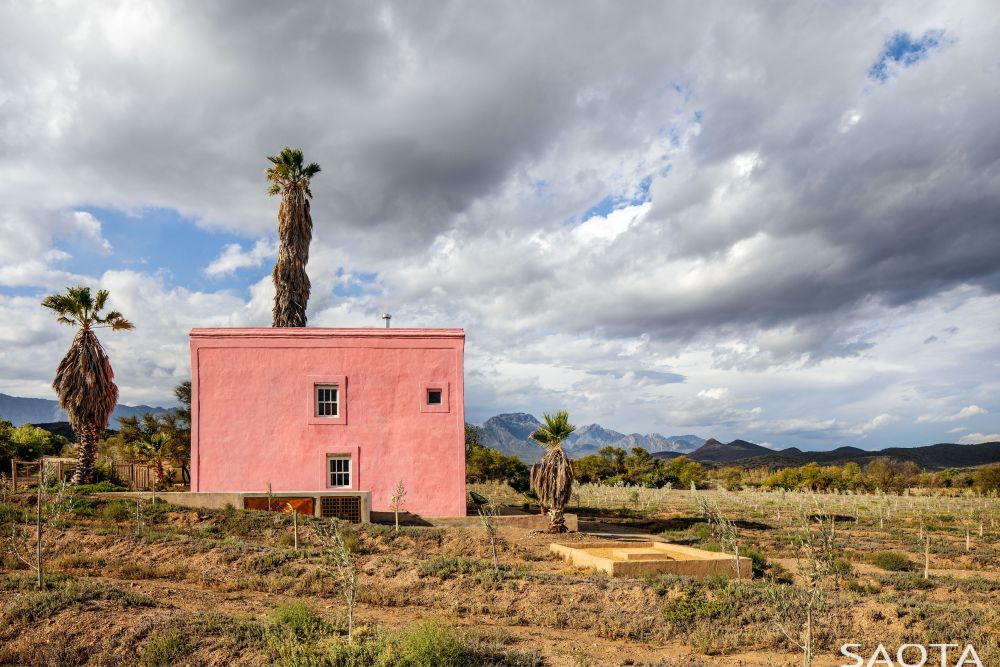 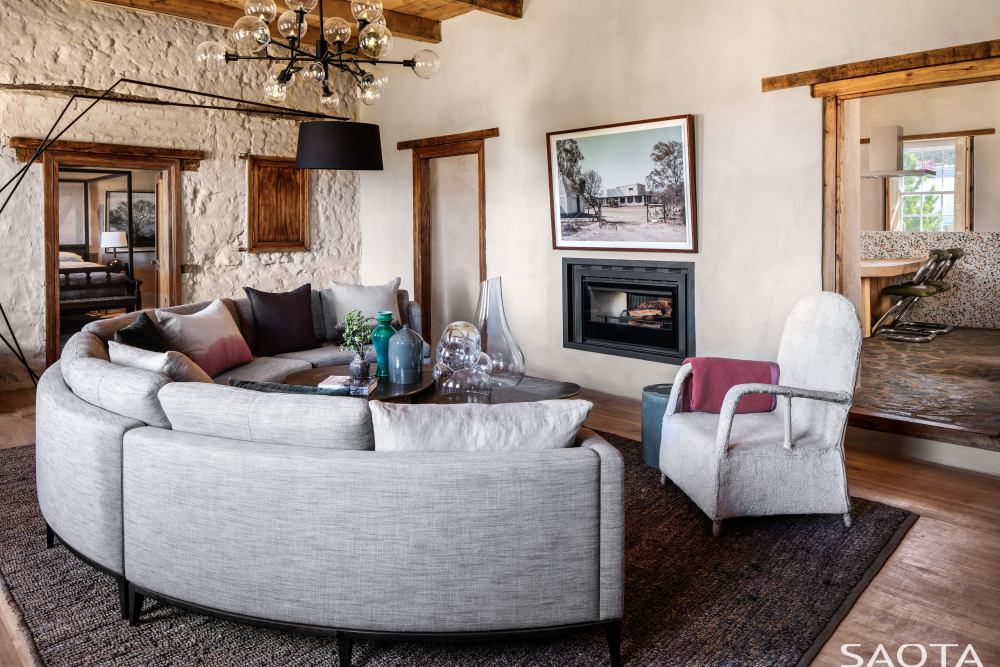 The front section of the main house consists of a central living room with a bedroom on each side. The T-section included a dining area. While the front section had yellowwood beams and ceilings, the rafters in T-section were exposed. A lean-to section with a fireplace had been added in one of the elbows of the T using sundried bricks and was being used as a kitchen.

On the interior, the main house floor was in bad repair so it was replaced with poplar floorboards sourced from the Eastern Cape. The original yellow wood ceilings were sanded down. At some point in the past, the roof had been redone with corrugated metal sheets and those were removed. The poplar pole roof structure was repaired by a specialist in traditional construction methods retaining all original dowel fixings. The roof was finally rethatched in locally grown “dekriet,” which is Cape thatching reed.

Once that was complete, a modern kitchen and bathrooms were inserted in an adaptive approach to conservation. 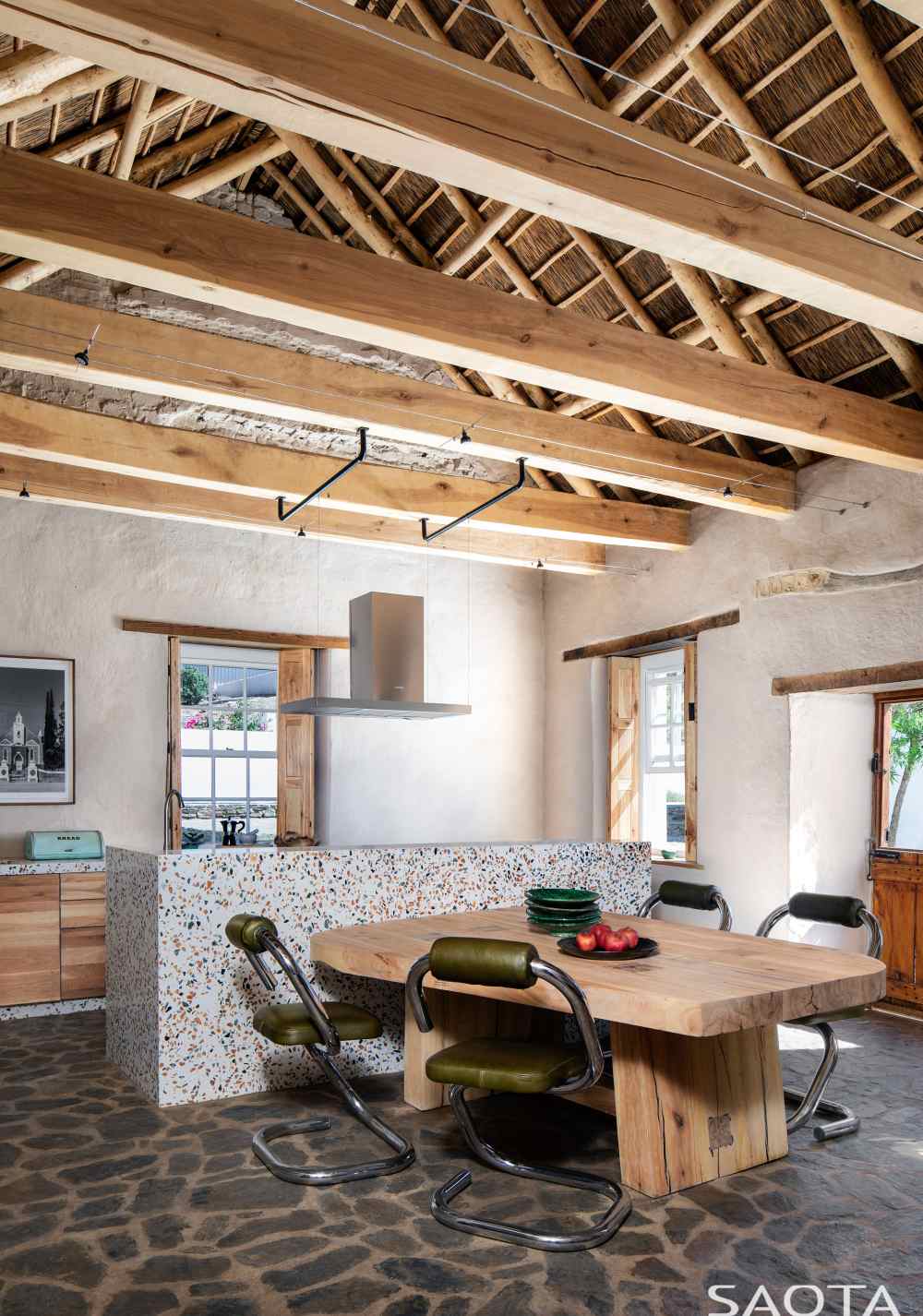 The rustic stone flooring is visible in this kitchen, which centers around the terrazzo island and attached wooden dining table. The rough-hewn look of the table helps pull unify the contrasting materials in the space with original elements including the window framing. Modern chairs that have a hefty visual feeling are perfect for the hybrid interior space. 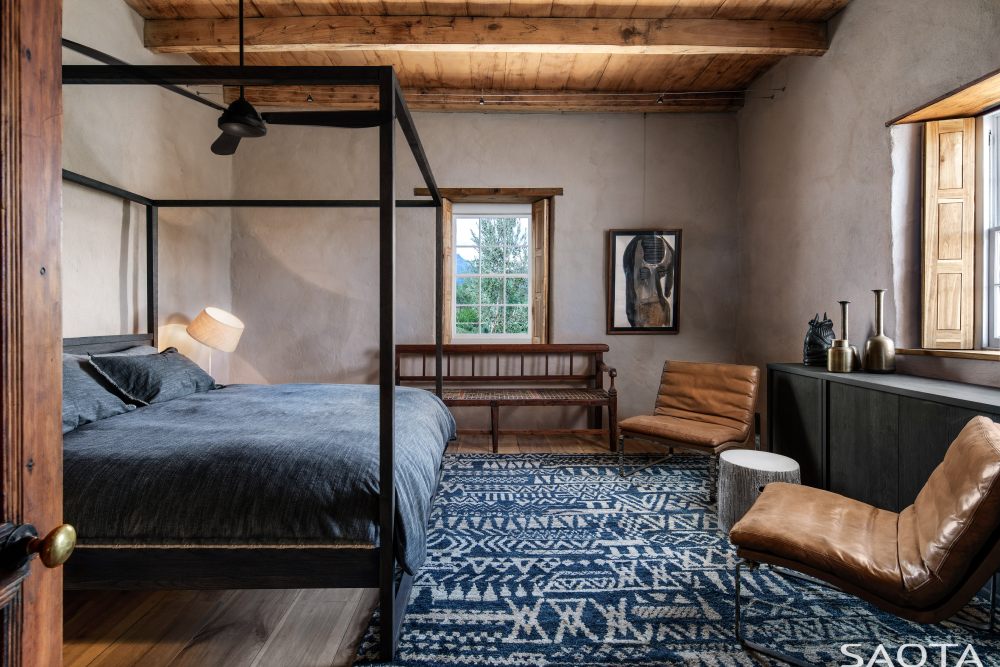 Traditional features like the wood and plastered walls are the dominant features of the bedrooms, while the furniture adds a contemporary aesthetic and emphasizes the casual nature of the space. The neutral palette is fitting and the navy bedding and handwoven rug add just enough color to brighten the space. 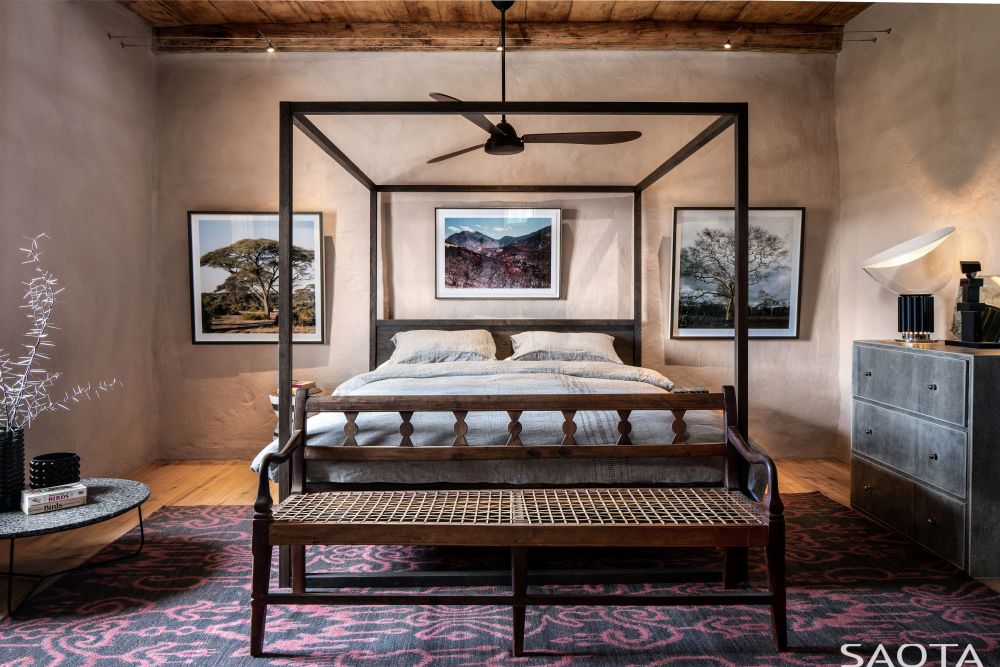 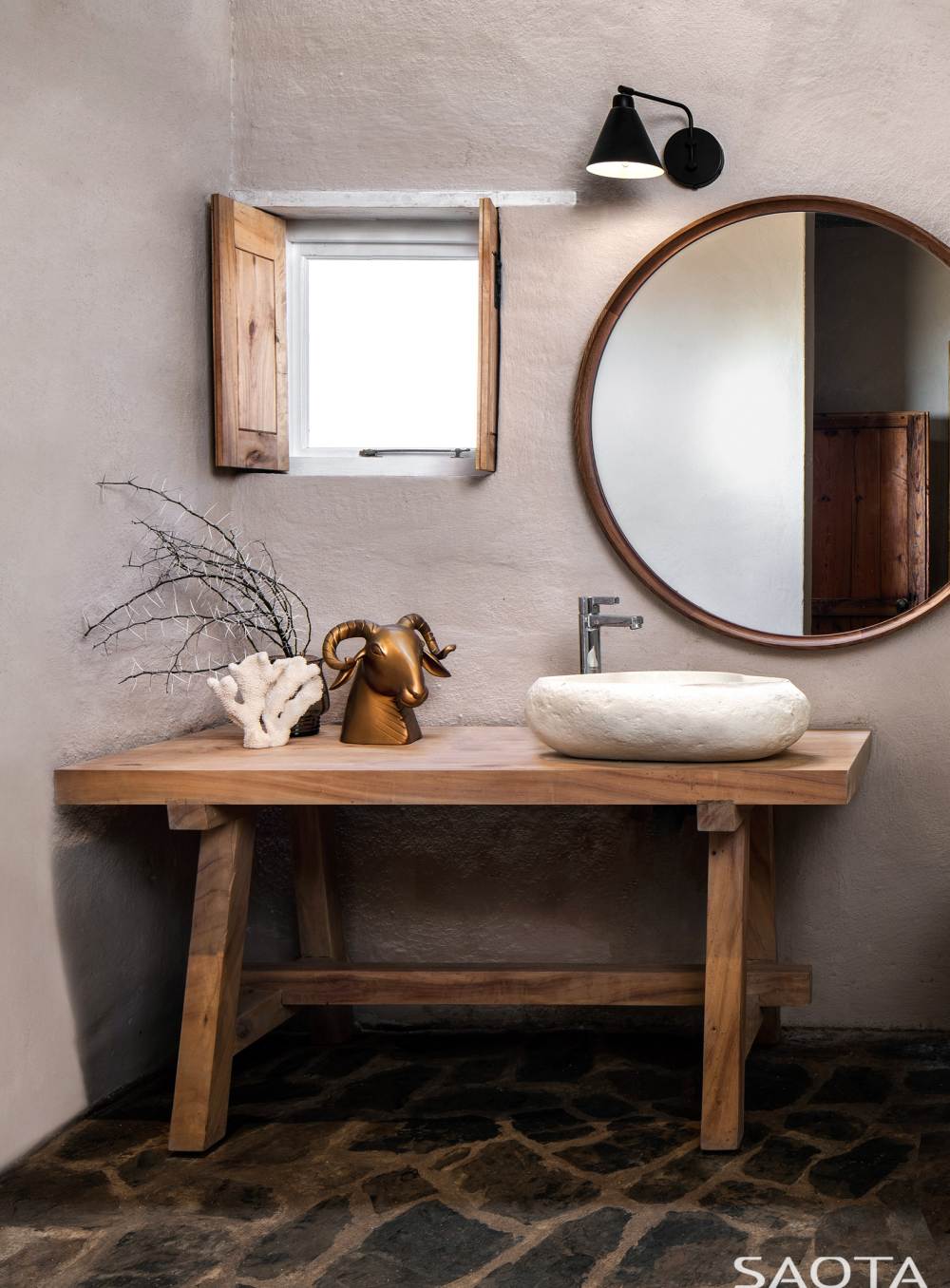 The same hefty wood that makes up the dining table also features in the powder room vanity. The simple design is a perfect pairing for the stone vessel sink. The look is completed with natural accessories and the gold ram’s head, a nod to animal farming. 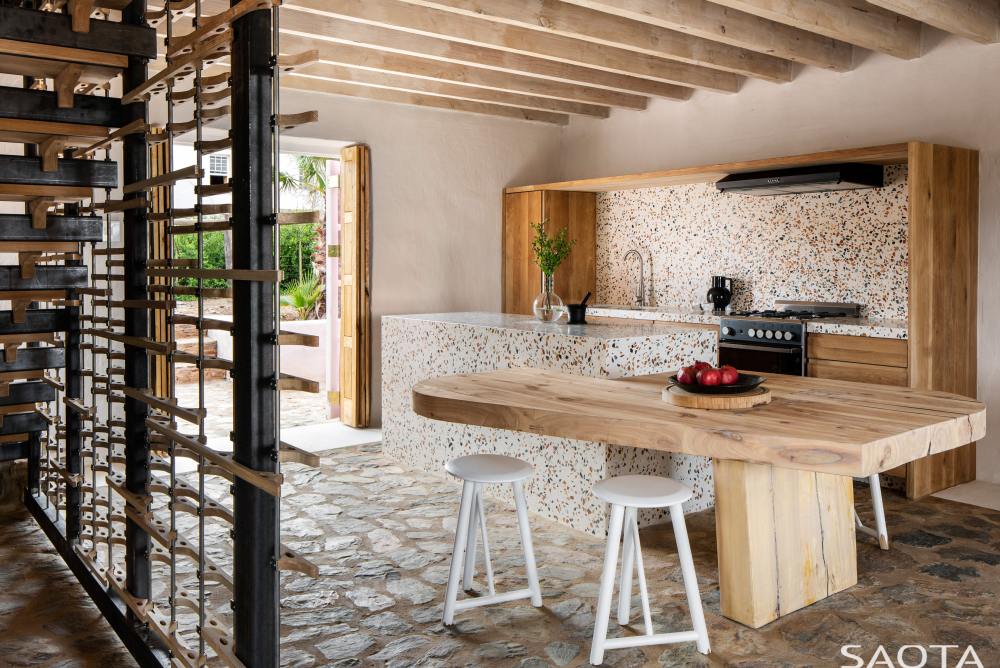 In another building, the kitchen is similarly constructed and the floor is even more rustic. The natural vibe is enhanced with the doors that can open fully to the terraced back yard, letting in fresh air and an abundance of natural light. While still appropriately rustic, this particular kitchen trends more toward the modern end of the spectrum thanks to the choice of stools, along with the unique wood construction that divides the stairwell from the kitchen area. 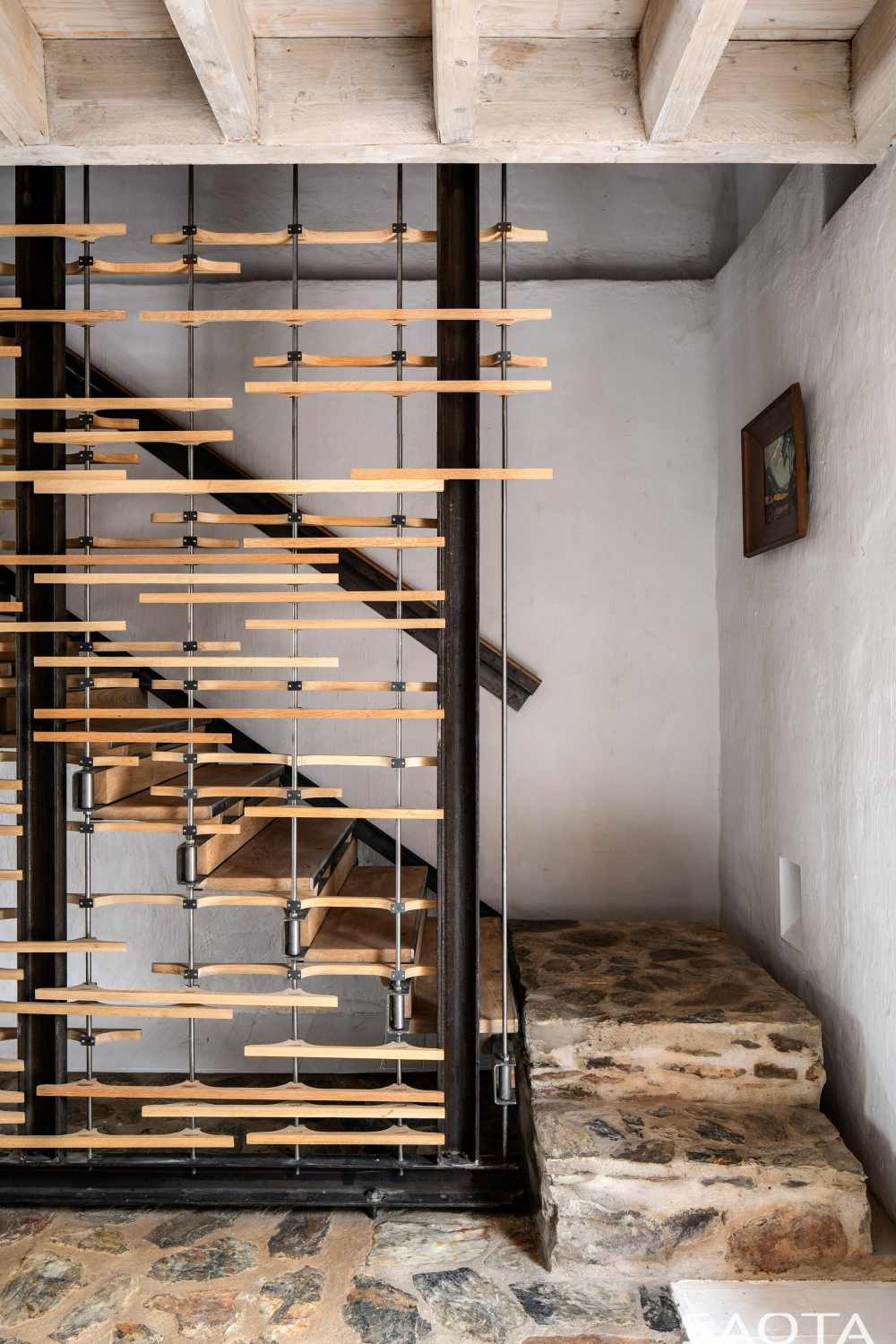 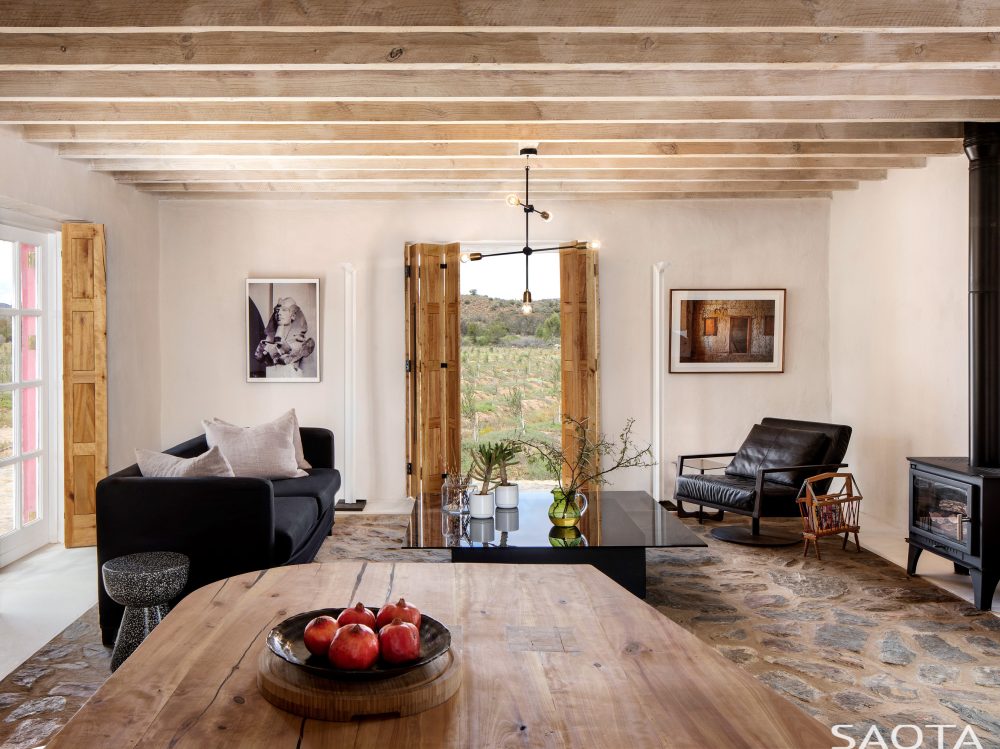 The attached living space also opens up to the outdoors, this time with a view of the orchards beyond. 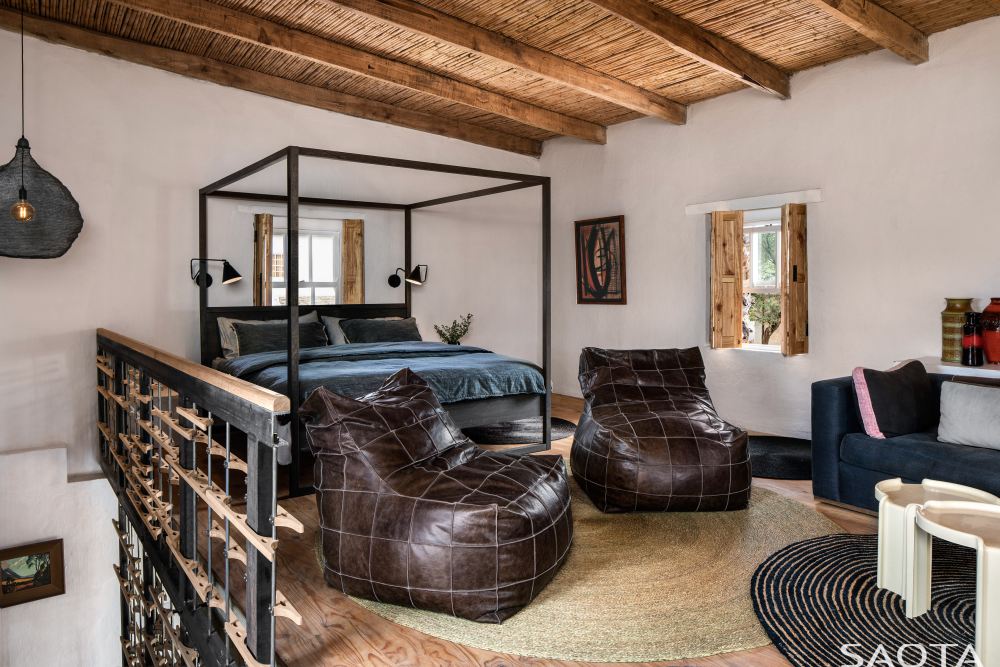 Done in a similar color palette and style to the other building’s bedrooms, the loft bedroom has an open, airy feeling and is large enough for an ample sitting area. The attached bathroom is constructed with the same terrazzo and plaster. The vanity is made from hefty wood but with a more refined finish. It also backs up to the wall with three spectacular tall windows offering views of the expansive orchards. The unique ceiling design includes minimalist spotlights, which provide good lighting and don’t detract from the view. 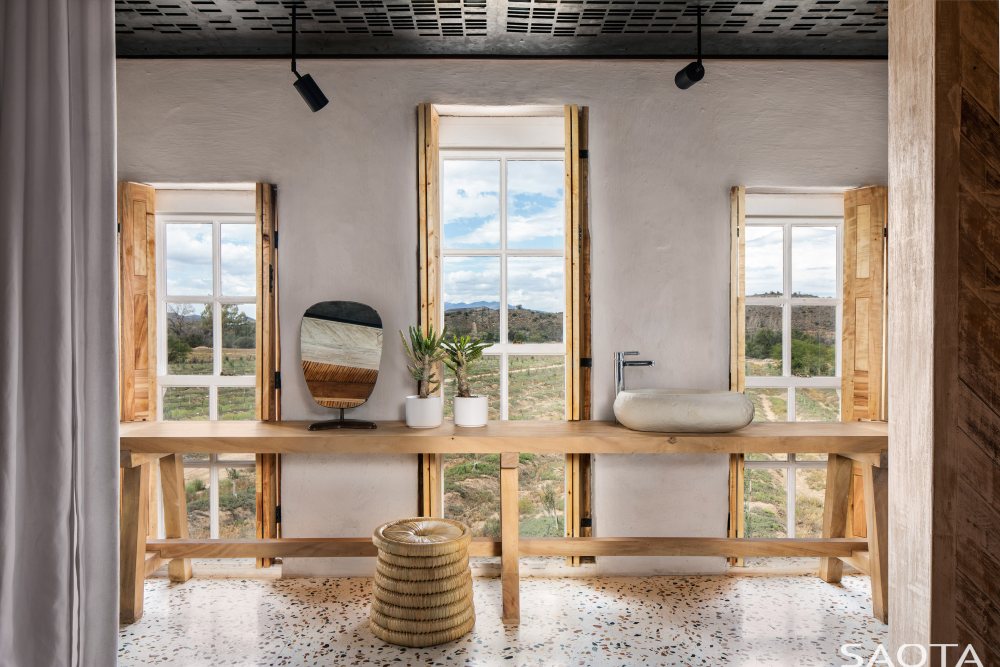 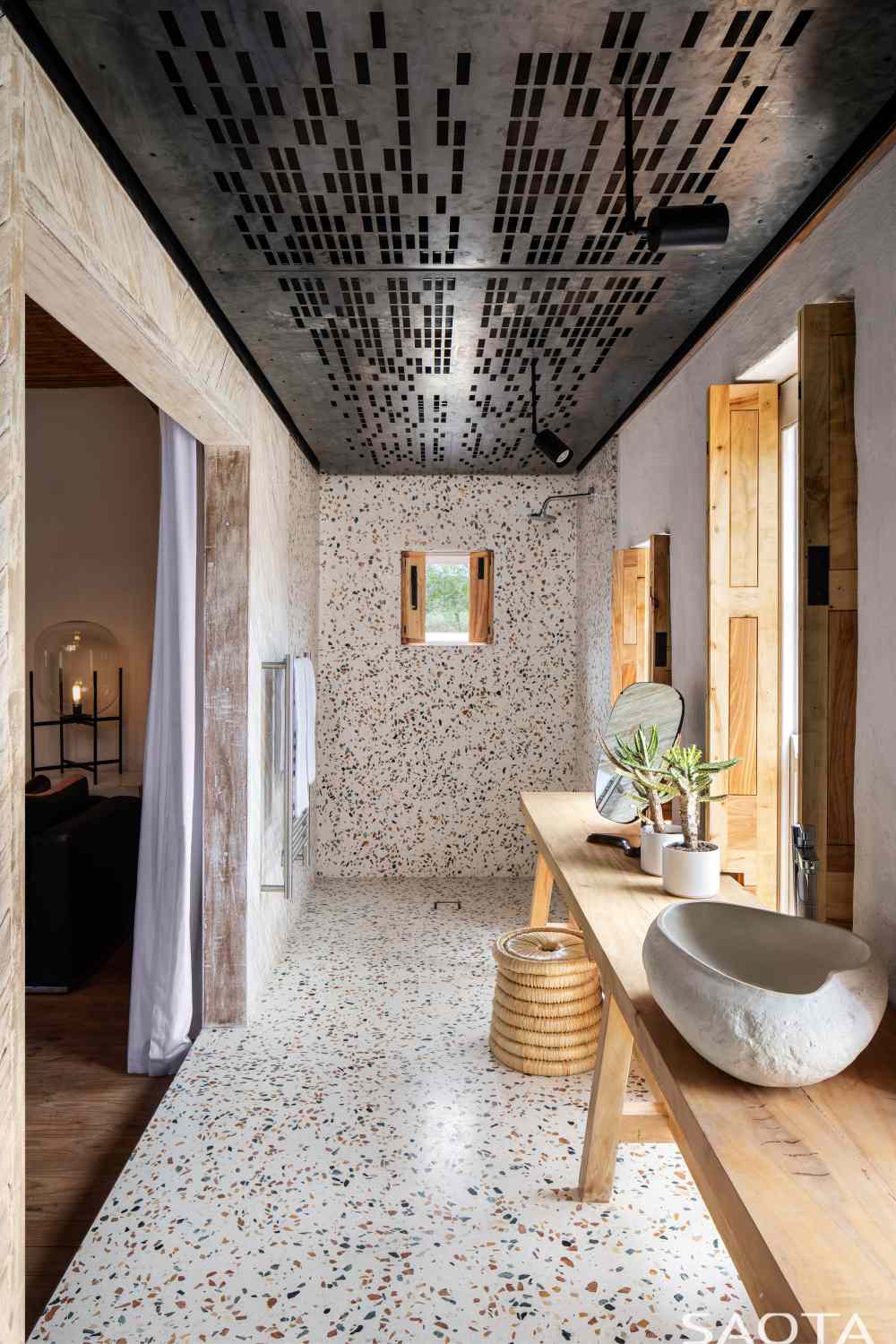