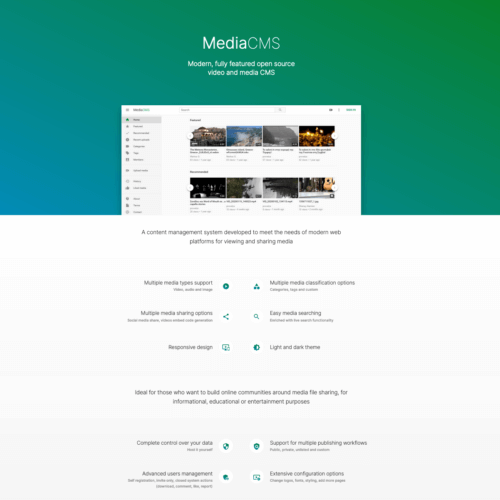 Since our founding in 2005, one of EngageMedia’s aims has been to support freely accessible media infrastructure on the web, and provide community-created alternatives to corporate-controlled platforms. While there are some fantastic open-source media platforms out there (such as PeerTube), there has been a gap in the market for an open-source video-sharing app that is simple enough for small-to-medium-sized video channels to install, customise, and maintain.

As of January 2021, MediaCMS is now live and released under a GNU Affero General Public License v3.0 on Github. You can check out the MediaCMS brochure site here and the live demo (with vanilla theme) here.

Plumi, EngageMedia’s original open-source video platform, stood the test of time for the last 15 years in a rapidly changing web technology landscape. But as it could no longer be sustainably developed and maintained, we migrated in 2020 our video platform archive of over 4,000 videos to our new video-sharing site built on MediaCMS.

MediaCMS offers us a more easily programmable and modern approach to software development (which encourages uptake by the open-source community), and replicates all of Plumi’s existing functionality. It also has an extended feature set, which includes chunked uploads and downloads (allowing the user to resume if their internet connection breaks), implementation of the improved video.js player, media playlists, and an API-based structure that can be configured to more readily connect with other systems.

Plumi was based on the Plone open-source CMS, which has struggled to maintain market share in recent years. On the other hand, the Django web framework (on which MediaCMS is based) goes from strength to strength, making the most of modern programming techniques and approaches. This means our investment into MediaCMS can be matched by other organisations, as evidenced by the choice of EngageMedia’s old friend Critical Commons to migrate to the new MediaCMS platform earlier in 2019.

With all this in mind, we believe that this new platform has a solid chance to succeed well into the next decade.

Our core development team consists of Wordgames’ Markos Gogoulos, one of Plumi’s longtime developers and who is now working on back-end Python programming, and Giannis Stergiou, who is working on the front-end React/JS development, along with EngageMedia Co-Founder and Associate Anna Helme, who contributes to product design, project management and testing.

The core development team originally intended to sprint together in Greece this year, but as 2020 unfolded, we revised our schedule and have worked via web tools this year (Wordgames is based in Athens and Crete in Greece; Anna is based in Melbourne). Since early 2020, we have been re-implementing our suite of features from Plumi such as Creative Commons licensing, taxonomy categorisation, subtitles/captions, and RSS feeds. In the last few months we have focused on preparing the software for release on Github and polishing off new features such as playlists and a front-end management system.

EngageMedia will continue as MediaCMS’ Product Development Partner into the coming years, aiming to solidify our own platform and to help provide infrastructure for independent video communities around the globe. In practice, this means the team at EngageMedia will continue to make important contributions to the platform’s design and direction. We also have a new design/brand and re-launch in the works for 2021.

In the meantime, read more about EngageMedia’s initiatives to promote open and secure technologies at EngageMedia.org/OpenTech.