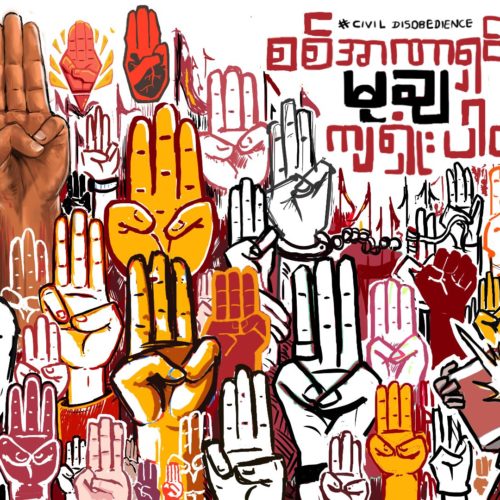 With protests in Myanmar showing no signs of stopping, both on the streets and on the internet, the country’s people and the international community continue to demand action and accountability for increasing human and digital rights violations by the military.

As of this writing, it has been over a week since the Myanmar military staged a coup against the country’s democratically elected government, arrested leaders, media workers, and activists, as well as imposed a year-long state of emergency in the country, citing irregularities in the November 2020 elections. Following the coup on February 1, the military (also called the Tatmadaw) has imposed a number of restrictions that violate human and digital rights.

Notably, internet and mobile network accesses were intermittently blocked in the days after the coup. On February 4, the country’s internet service providers were ordered to block Facebook. A similar directive to block Twitter and Instagram came barely a day after. The internet has since been restored as of February 8, according to the internet monitoring body NetBlocks. Social media platforms, however, remain blocked. Five days earlier, internet access was also seemingly restored in Rakhine and Chin states, which previously was subject to the world’s longest internet shutdown.

On February 10, the military also sought to consult telecommunications companies on a cyber security bill that could add further legal weight to internet shutdowns and content takedowns in the country.

Myanmar remains in a state of emergency, and as protests continue to swell, and more dissidents are arrested and threatened, it’s likely for the military to again order internet shutdowns or hinder access to social media platforms and other communications networks. It is a tactic we have seen – and continue to see – being deployed by governments in the Asia-Pacific, such as in Thailand last year and in India just a few weeks ago.

This coup and subsequent protests are not the first in Myanmar’s history, only the latest in a series of roadblocks that have derailed the country’s journey towards democracy. But regardless of how many times history may repeat itself, this much should be clear: Shutting down the internet and cracking down on dissent are part of a broader restriction of democratic participation, and a clear violation of the Myanmar people’s right to freedom of expression and information.

The military gov had sent out a request for consultation to the “cyber security bill” dated yesterday to the telcos with many clauses which will legalise them to order shutdowns, website bans, content take downs and interceptions. #WhatsHappeningInMyanmar #myanmarcoup #KeepItOn pic.twitter.com/aF0ilUl9O8

What digital rights have been violated in Myanmar?

As previously reported, this is not the first time in Myanmar’s history that the internet has been shut down, or that access to social media platforms and mobile networks have been restricted. Aside from the internet shutdown in Rakhine and Chin states, the Myanmar government in the past had also blocked access to local news channels and websites in Rakhine, where many of the Rohingya Muslims reside.

This continued crackdown on social media platforms is also alarming, particularly when about 40 per cent of Myanmar’s population is on Facebook (despite the platform’s admission in its role in perpetuating misinformation that contributed to genocide against the Rohingya). Additionally, there were reports of a military order allegedly blocking virtual private networks (VPNs), which would allow for the download of applications and software unavailable to those in Myanmar. These have made it more difficult for people in Myanmar to share information and communicate beyond SMS and calls.

Beyond the coup, such shutdowns severely restrict people’s human and digital rights to access to information and freedom of expression online. These freedoms are especially important in light of the COVID-19 pandemic, where lack of information can only worsen the situation. As expressed by Felicia Anthonio, Access Now campaigner and lead of the #KeepItOn coalition: “It was incredibly troubling to know there’s a full-scale military coup taking place behind an internet blackout … There are chaos and confusion, and the people of Myanmar — and the world — have a right to document events, access information, and communicate with each other”.

A week after the onset of internet disruptions in #Myanmar amid a military coup and detention of civilian leaders, connectivity has returned to 95% of ordinary levels. However, social media remain restricted for many and the situation remains tense

2. Crackdown on, and detention for, dissenting voices

In the days after the coup, the UN High Commissioner on Human Rights has expressed “deep fears of a violent crackdown on dissenting voices”. The Myanmar Press Council has issued a statement condemning attacks on journalists covering the coup and protests. For speaking out against the military, the Network for Human Rights Documentation – Burma anticipates that “civil society organisations and human rights defenders are at risk of illegal detention and arbitrary arrest”.

As of February 4, the Assistance Association for Political Prisoners reported that at least 147 people have been detained. Among those arrested are filmmaker Min Htin Ko Ko Gyi and 88 generation activist Mya Aye. A number of dissenters have been detained since the nationwide protests began, on top of the police’s blatant use of force to quell the demonstrations.

The restrictions on internet access also hamper dissenting movements both online and offline. One example is the civil disobedience campaign by the Yangon Youth Network, which is especially active online.

As emphasised by ARTICLE 19, international law maintains that the rights to freedom of expression and information may only be restricted if the restrictions are prescribed by law, in pursuit of a legitimate aim, and necessary and proportionate to that aim.

Widespread condemnation of the coup: Who have spoken up?

Despite attempts to restrict freedom of speech, organisations and civil society in and outside Myanmar have widely condemned the military coup and further actions to restrict not only internet and mobile access, but also any and all attacks on the media’s and people’s freedoms of expression and access to information.

Beyond these statements, regional and international bodies have also heavily emphasised how the military coup and subsequent actions violated not only Myanmar’s democratic reforms but also international human rights laws.

What can we do about #WhatsHappeningInMyanmar?

The situation continues to develop daily, and vigilance is still sorely needed to support the people of Myanmar amid internet shutdowns and attacks on freedom of speech. On these issues, here’s how we in the Asia-Pacific can help: